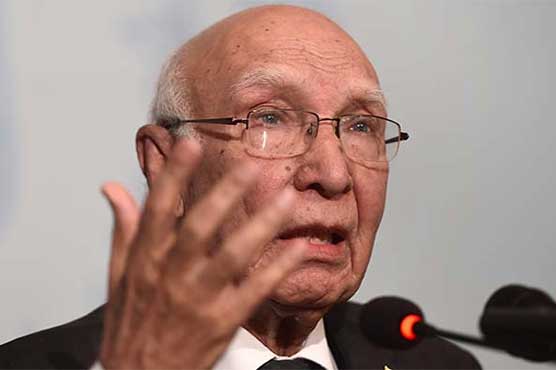 In this telephone conversation, Sartaj Aziz underlined that the Government and the people of Pakistan were in a state of deep anguish and pain at the recent terrorist incidents in various parts of Pakistan resulting into loss of precious human lives.

Adviser conveyed to the Afghan National Security Adviser that terrorist group Jamat-ul-Ahrar (JuA) was behind these barbaric acts of terrorism. He expressed serious concern that JuA continued to operate from its sanctuaries and safe haven in Afghanistan for undertaking terrorism in Pakistan and the Government of Afghanistan had not paid a heed to Pakistan s repeated calls on the Afghan government to take action against the group and its activities based in Afghanistan. In this regard, Pakistan has shared a list of suspected JuA terrorists with the Government of Afghanistan for action against them.

The Adviser to the Prime Minister underscored that terrorism was a common threat and its elimination required close cooperation. He said it was important that Afghan government should take strong action against such elements to reaffirm that its soil was not used for terrorism in Pakistan.

Sartaj Aziz emphasized that cooperation between Afghanistan and Pakistan was vital for effectively combating the scourge of terrorism. In this regard, effective border management was required to prevent the movement of terrorist elements across the border.

The Afghan National Security Adviser expressed his government s condolences over the loss of lives in the recent terrorist incidents in Pakistan.