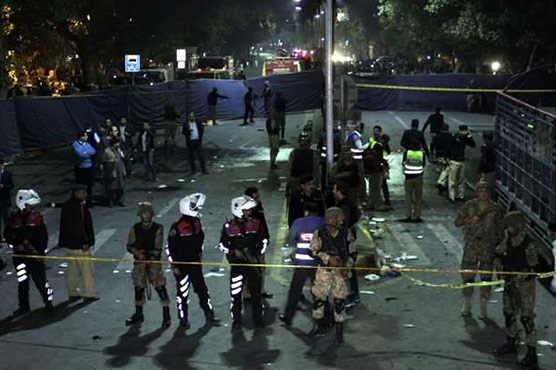 LAHORE (Dunya News) – Sources have reported on Thursday that intelligence agencies have identified handlers of the suicide bomber that attacked Lahore earlier this week.

Initial investigations conducted by Punjab Police and Intelligence agencies suggest that at least six attackers were shifted to Pakistan from Afghanistan by banned outfit, Jamaatul Ahrar which is a splinter group of Tehrik-i-Taliban Pakistan.

Reportedly, four of the total six terrorists arrived in Lahore while two were dispatched to Sialkot. Facilitator Ameen provided a place to stay to the four extremists in Lahore, reports suggest.

Meanwhile, law enforcement agencies have collected data of mobile phone calls that were made around the attack site. The government has announced Rs 1 million reward for providing information about the facilitator that was revealed to be on ground that day using footages of CCTV cameras.

13 persons were killed in the blast while another local succumbed to injuries while under treatment in a hospital taking the death toll to 14.

Prime Minister, President, Chief of the Army Staff, provincial and federal ministers condemned the attack and vowed to utilise all possible assets to ensure safety of the people.