Balochistan made hub of development: PM 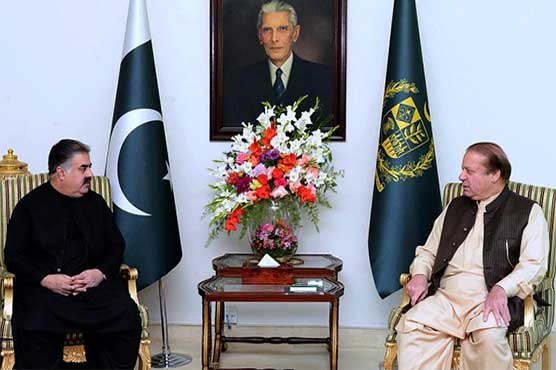 On the occasion, the Prime Minister stated that the federal government is focused on development of Balochistan which was ignored by the previous governments.

“We have made Balochistan as hub of development through investment in road and energy sectors,” he said.

Meanwhile, Sanaullah Zehri thanked the premier for extending maximum support to the people and the government of Balochistan.

Nawaz Sharif, during the meeting, said the federal government is focusing on development of Sindh both at urban and rural parts.

PM said the government has initiated several projects for the people of Sindh including energy, infrastructure and social sectors.

“With mutual consensus of all stakeholders, we acted for bringing peace in Karachi and by the grace of Almighty, law and order situation has substantially improved”, stated the PM.

He recalled that last week he inaugurated the completed section of Karachi to Hyderabad Motorway M-9 to facilitate people of Sindh. Also included Karachi circular railway project in CPEC and work on green line mass transit project is in full swing.

The premier said that K4 and Lyari expressway project is also being supported by the federal government.

PM stated that Governor Sindh should play an instrumental role and act as a bridge between the Federal Government and the Government of Sindh so that development initiatives are effectively implemented in time.