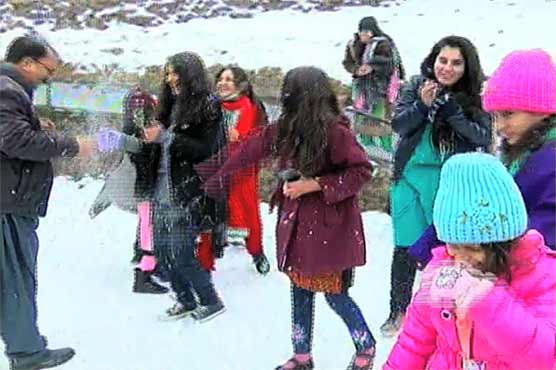 Temperature fall was recorded in Punjab, Khyber Pakhtunkhwa and Balochistan

LAHORE (Dunya News) – Cold breeze has been blowing all around the country from a couple of days. The twin cities of Islamabad and Rawalpindi witnessed a second-day of heavy rainfall along with thunder storms yesterday.

Rain clouds surrounded Lahore also as it showered from time to time throughout the segments parts of day. Other cities of Punjab had similar conditions where temperature dropped and it rained in areas though varying in intensity.

The capital of KP Peshawar and many cities of Punjab including Kasur, Gujranwala, Sialkot, Faisalabad, Kahna, Kundian, Shujabad had rain from time to time and temperature decreased. As a result, the climate has become colder.

Balochistan too experienced such climatic conditions. Temperature drop was recorded in the provincial capital Quetta, Chaman, Galyat and other areas.

As far as the northern areas are concerned, snowfall occurred in many districts. However, climate experts warn that global warming and climate change are affecting Karachi. It is causing intense rainfalls and can become a cause of sea storm.