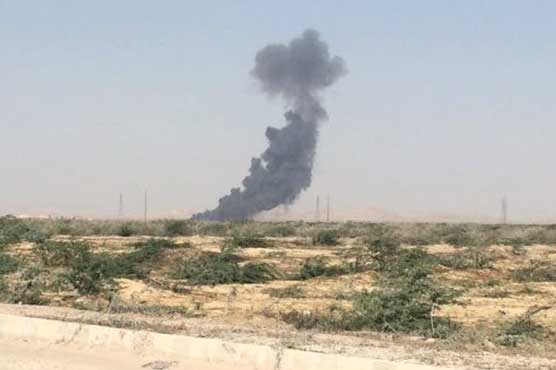 Pakistan's air force has suffered similar crashes in the past.

KARACHI (Dunya News) – A Pakistan Air Force (PAF) jet crashed while on a training mission in Karachi on Tuesday, killing the flight lieutenant.

A huge explosion was heard as the Mirage aircraft went down in Musharraf Colony of Maripur area.

Shortly after the crash, Dunya News showed footage of its burning wreckage as firefighters rushed to the spot.

Fate of the pilot is not known yet.

Pakistan’s armed forces have had several air accidents in the past 18 months, including a crash that killed female jet pilot in another training exercise in November last year.

On September 24, PAF’s F-7 aircraft went down near the town of Jamrud, near the entrance to the Khyber Pass, and Flight Lieutenant Amer Shazad was killed.

In May 2015, a military helicopter carrying diplomats to inspect a tourism project crashed, killing seven people, including the ambassadors of Norway and Philippines.

Another military helicopter being used as an air ambulance crashed in August 2015 near the northern district of Mansehra, killing 12 people.