Ratification of decisions by Altaf no longer required: Farooq Sattar 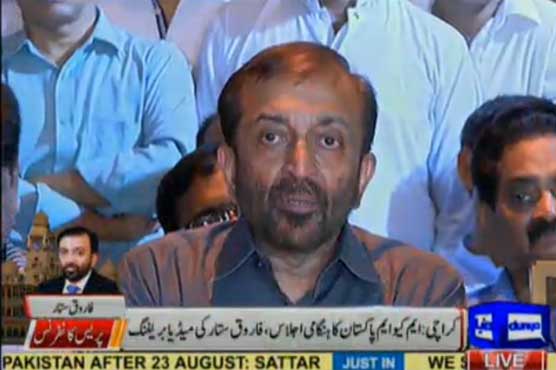 Ratification of decisions by Altaf no longer required: Farooq Sattar

"We ran MQM in the past and will run it in the future too", said Sattar. He added that some amendments have been made in MQM s constitution. "The previous practice was that we used to take decisions in the Rabita committee and then seek Altaf Hussain s guidance as the founder of the party and its chief ideologue", he said.

However, now the constitution has been amended. The article 9-B that compelled the party to seek guidance from Altaf Hussain has been removed from the party constitution now. "We have taken the decisions in our hands now", he said.

"We never said anything against whatever the party chief said as long as he was the constitutional mentor of MQM. We respected him earlier and we ll continue to respect him in the future as well", said Farooq Sattar.

Another amendment made to the constitution now allows Senior Deputy Convener of the party to preside over party meeting in absence of the party convener.

"However, we still stand firm with our demand about the missing persons. We also demand release of the innocent MQM workers who were unnecessarily arrested on August 22, despite the fact that they were not in the videos and had nothing to do with the speeches that Altaf Hussain made that day", he said. He added that party offices were illegally demolished and sealed. "People are still being arrested without any reason whatsoever. We demand an end to this practice", he said.

Farooq Sattar said that the party believed it was being persecuted despite having rejected those who raised anti-Pakistan slogans.