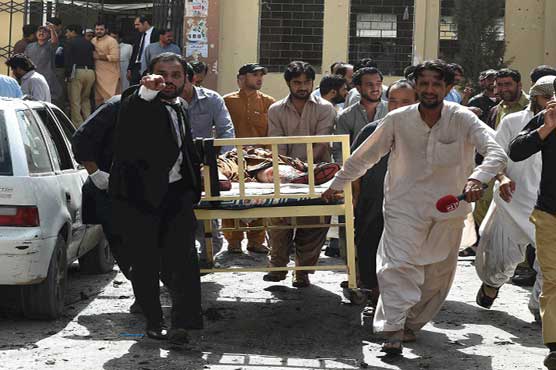 More than 40 injured people are under treatment at Aga Khan Hospital in Karachi.

According to Combined Military Hospital (CMH) sources, the deceased has been identified as advocate Faiz Ullah.

On the other hand, more than 40 injured people are under treatment at Aga Khan Hospital in Karachi while lawyers are still protesting and demanding foolproof security for them.

Earlier, at least 74 people including lawyers and media men were killed and dozens injured in a suicide blast at the Civil Hospital in southwestern city of Quetta on August 8.

Many of the dead were lawyers and journalists who had earlier gathered to cover a protest over the murder of Balochistan Bar Association president Bilal Anwar Kasi.

Aaj TV cameraman Shehzad, Dawn News cameraman Mehmood Khan and ex-BBA president Muhammad Kakar were among those killed in the incident, whereas, Dunya News reporter Faridullah was among the injured people.

According to Bomb Disposal Squad (BDS), eight to nine kilograms of explosives were used in the attack.

CJ visits those who were injured in Quetta incident