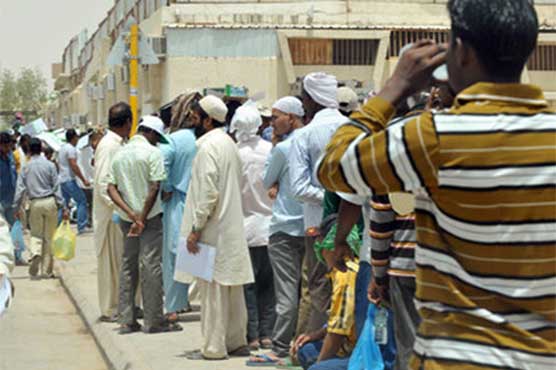 The people are forced to spent their days under open sky and are also lacking food and medicines.

The victims have requested Prime Minister (PM) Nawaz Sharif and Chief of Army Staff (COAS) General Raheel Sharif to take action for their return to Pakistan.

They said that nearly 500 people are stranded in Saudi Arabia as they are not given monthly salaries due to financial problems of their employer, M/s. Saad Contracting and Construction Company.

Earlier, Ministry of Foreign Affairs informed that the Embassy of Pakistan in Riyadh is making efforts to address suffering of Pakistani workers in Dammam.

“The Embassy has been in touch with Pakistanis, facing the issue, and also the company administration. On 18 May, the Embassy representative, who deals with legal matters, visited the company and met our expatriates, who were facing the issue of nonpayment. The representative also met the company officials who assured that they are trying to overcome their problems and intend to clear their employees dues as soon as possible,” the ministry reported.

The Embassy had also brought the matter to the attention of the Saudi Foreign Office.

“Our Mission is closely pursuing the matter with the view to alleviate the difficulties being faced by our expatriates at the earliest possible,” the ministry stated.