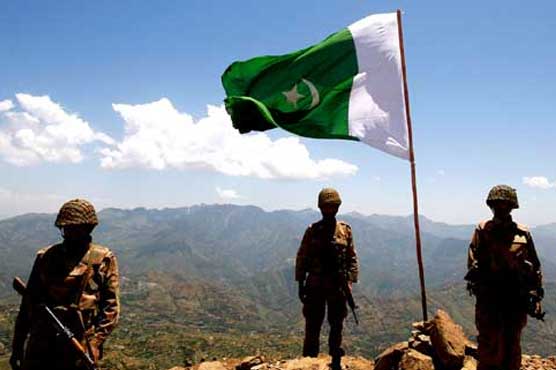 Troops began the final phase of the Zarb-e-Arb mission in North Waziristan in February.

In February troops began the final phase of the Zarb-e-Arb mission in North Waziristan, on the border with Afghanistan, where militants had previously operated with impunity.

"We have cleared the Shawal valley completely of militants," Brigadier Shabbir Narejo told reporters at a briefing.

Troops, helicopter gunships, tanks and jets were deployed in the operation, during which Taliban militants put up "stiff resistance", Narejo said.

"There were up to 2,000 trained militants in the valley, but we surprised them by launching the operation in the peak of winter in minus 12 degrees Celsius (10.4 Fahrenheit)," he said.

He said that six soldiers and up to 120 militants died in the fighting.

Reporters were shown weapons and missile launchers that were seized and also huge tunnels where militants had been hiding in the thick, forested valley.

Narejo said some militants had fled to Afghanistan, but that troops had set up around 15 posts on the border to intercept any movement.

"We have eliminated the threat and it would pave the way of the return of some 150,000 people of North Waziristan to their homes soon," he added.

The army launched the operation in mid-2014 in a bid to wipe out militant bases in the area and end the near decade-long insurgency that has cost Pakistan thousands of lives.

The operation was intensified after the Taliban massacred more than 150 people, the majority of them children, at a school in the northwestern city of Peshawar in December 2014.