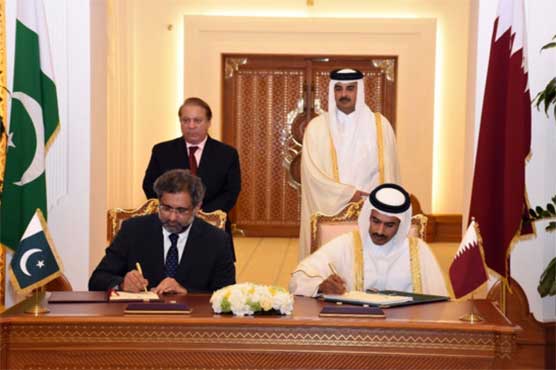 The visit is on the invitation of Emir of Qatar Sheikh Tamim bin Hamad bin Khalifa Al-Thani.

DOHA (Web Desk) - Pakistan and Qatar on Wednesday have signed four agreements and Memorandum of Understandings (MoUs) to increase cooperation in diverse fields between the two countries. 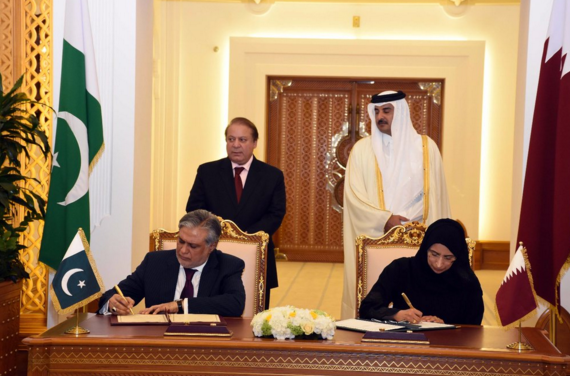 The most important agreement signed is regarding import of Liquefied Natural Gas (LNG) from Qatar. It was signed by Minister for Petroleum and Natural Resources Shahid Khaqan Abbasi and Chairman of Qatar Gas.

Under the agreement Pakistan will import 3.75 million tons of LNG annually from Qatar which will fulfill twenty percent need of Pakistan.

MOUs for enhancing bilateral cooperation with Qatar in Radio and TV, education, health and academic research were also concluded by both sides.

The main focus of the Prime Minister’s visit and interaction with the Qatari leadership is on further enhancement of bilateral relations in various fields, including energy cooperation, trade and investment, defence and increase in employment opportunities for the Pakistani workforce in Qatar.

Both leaders also exchanged views on regional and international issues of mutual interest.

Qatar hosts more than 115,000 Pakistanis, who have been contributing towards the development and prosperity of the country and act as a bridge between the peoples of two brotherly countries.