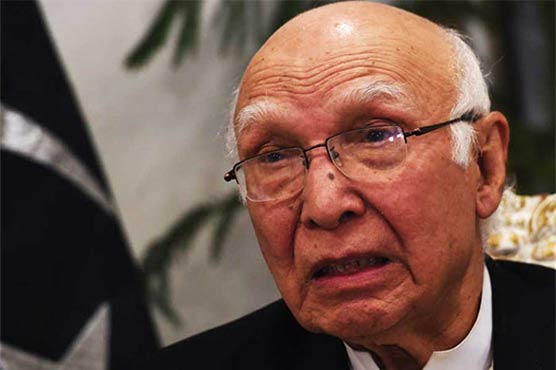 Pakistan is concerned over the tensions between the two countries, Aziz said.

Pakistan is concerned over the tensions between the two countries, Aziz said.

He further stated that Muslim Ummah is facing sever threats and challenges in the prevailing circumstances.

The adviser said being friend of Saudi Arabia and Iran, Pakistan will try to bridge the divide and improve relationship between the two countries.

Pakistan will continue to play its positive role as an important member of OIC, he added.

He said after the visit of Saudi Arabian Foreign Minister to Pakistan on Thursday, he will be able to give a more detailed statement on the issue of tension between Iran and Saudi Arabia and other related issues.

On the other hand, Opposition Leader Khurshid Shah rejected Sartaj Aziz’s policy statement in the House.

Shah said that Aziz should not read Foreign Office’s (FO) press release to the participants as it sounds like a statement of a ‘weakened and helpless state.‘

He demanded the government to clear its constraints and ties with the countries as Saudi-Iran tiff could affect the entire region.

Shireen Mazari said the issue is very sensitive and the government should have an even handed approach towards it.

Tensions between Saudi Arabia and Iran erupted into a full-blown diplomatic crisis as Riyadh and its allies cut or reduced ties with Tehran, sparking global concern.

European countries and regional power Turkey voiced concerns over the row, while US Secretary of State John Kerry called his Iranian and Saudi counterparts on Monday and Moscow offered to act as an intermediary.

The UN envoy for Syria headed to Riyadh and Tehran to defuse tensions, and a US official said Washington was "urging calm and de-escalation".

The crisis has also raised fears of an increase in sectarian violence in the Middle East, including in Iraq where two Sunni mosques were blown up late Monday and two people killed.

Saudi Arabia insisted at the United Nations, however, that the row would not affect efforts to resolve conflicts in Syria and Yemen.

"From our side, it should have no effect because we will continue to work very hard to support the peace efforts in Syria and Yemen," Abdallah al-Mouallimi, Saudi Arabia’s ambassador to the UN, told reporters.

He said Riyadh would attend upcoming talks on Syria, but took a swipe at Iran’s role in the nearly five-year war there, saying: "They have been taking provocative and negative positions... and I don’t think the break in relations is going to dissuade them from such behaviour."

Saudi Arabia cut ties with Iran late on Sunday, giving diplomats 48 hours to leave the kingdom after protesters -- responding to Nimr’s execution -- set fire to its embassy in Tehran and a consulate in second city Mashhad, an attack strongly condemned by the UN Security Council.

Bahrain and Sudan followed suit on Monday, and the United Arab Emirates also downgraded its ties, recalling its envoy from Tehran.

Some 80 Saudis, including diplomats and their families, had already left Iran and arrived in Dubai on Monday, diplomatic sources said.

The Saudi civil aviation authority said all flights to and from Iran were also being suspended.

Iranian officials denounced the Saudi moves as tactics that would inflame regional tensions.

Iran and Saudi Arabia are on opposing ends of a range of crucial Middle East issues, including the war in Syria -- where Tehran backs President Bashar al-Assad’s regime and Riyadh supports rebel forces -- and Yemen where a Saudi-led coalition is battling Shiite insurgents.

The deterioration in relations "will further diminish already low expectations" in particular for talks on Syria expected to take place this month, according to Noah Bonsey, a senior analyst at the International Crisis Group.

"Ultimately, reaching a political resolution in Syria would require key states backing each side to make reciprocal concessions, and pressure their Syrian allies to do the same," he said. "For now, things are moving in the opposite direction."

The spike in tensions comes after Iran last year secured a historic nuclear deal with world powers led by the United States, sparking major concern in longtime US ally Riyadh.

The Cairo-based Arab League said it would hold an emergency meeting at Riyadh’s request on Sunday to discuss the attacks on Saudi diplomatic premises and alleged Iranian interference.

Oil prices fell, and Gulf stocks tumbled, with six of the region’s seven exchanges down.

Iran’s President Hassan Rouhani, a moderate, on Sunday criticised those who attacked the diplomatic buildings, calling them radicals, and 50 suspects were arrested.

Some 3,000 demonstrators rallied in Tehran on Monday, chanting anti-Saudi slogans and burning US and Israeli flags.

Nimr, one of 47 men executed on Saturday, was a driving force behind 2011 anti-government protests in eastern Saudi Arabia.

He was arrested in 2012 after calling for two Saudi governorates to be separated from the kingdom and Riyadh’s interior ministry at the time described him as an "instigator of sedition".

Rights groups, however, have raised concern about the fairness of his treatment, with Amnesty International saying Nimr received "a political and grossly unfair trial" and that Riyadh was using his execution to settle political scores.