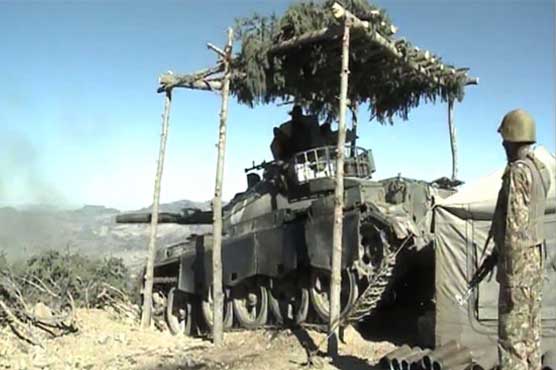 Wajahat S. Khan explains how our soldiers sacrifice their life, time, everything for the nation

LAHORE: (Web Desk, Dunya News) – Pakistan soldiers have been sacrificing their lives, time, social circles and everything they have for the nation and Wajahat Saeed Khan took war reporting to a new level on Sunday on his show Mahaaz as he reached out to the soldiers who are fighting at the battlefront.

In his show ‘Mahaaz’, Wajahat S. Khan talked to the soldiers on the front, interviewed company commander, learnt about the sophisticated weapons deployed to eliminate the enemy and discussed the end to this war. One of the most difficult war terrains of the world were thus explained on TV and the feelings and activities of the soldiers at the front were shown to the viewers.

On the show, Wajahat showed the fallen trees and the trenches created due to the heavy shelling between Pakistan army and the terrorists, reporting from 12,000 feet above sea level, showing how our soldiers are fighting the hardships of the battle. “War isn’t an easy thing”, said Waj.

Talking to Wajahat on the show, Major Muhammad Ali Afridi told how the mortar guns can target the enemy within 7-kilometer radius of the gun. He told how the soldiers are sacrificing their time for the nation. “I slept only 2 hours last night and if I get 4-hour sleep tomorrow, I’ll consider myself a happy man”, said Major Afridi. “My team has been here for the last 6 months. Before that, we spent some 6 months in Darra Adam Khel. We also fought the terrorists in Swat operation in 2009-10”, he added.

My company s real strength: this 120MM mortar. It sinks into the earth after firing due to pressure #ShawaalKaMahaaz pic.twitter.com/DhIIjyr9hu

Major Afridi said that all the adjacent villages to his highest post were controlled by the Tahreek-e-Taliban Pakistan (TTP). But Pak army regained the peaks and all the villages from the enemy. When asked how he projects the war now, Afridi said, “The war is coming to an end, Wajahat Bhai”.

Looking at the mountains and the tough alleys in this valley, it seems almost impossible to bring a car here. But Pakistan army has not only constructed roads and brigade headquarters here but has also brought tanks to this place. Kudos to the Engineering Corps. This shows the seriousness of the army in this war on terror. As Wajahat said in his show, “24 units are deployed here. Most of our corps do not comprise that many units but here we are. This shows Pakistan army’s commitment with this war as it moved its troops from the tense Eastern border to these mountains to fight the terrorists”.

Wajahat also talked to the soldiers appointed on the Observation Posts (OP), the first line of defence for the army where only 2 soldiers are deployed who keep a constant check on the enemy. They have been directed to shoot the first thing they see moving without asking any questions from anyone. “When I see the enemy, I shoot. I don’t need permission”, said the soldier up there.

Pakistan army has sacrificed too much in this war but they have achieved a lot more than that. Some of the highest battlegrounds of the world have been recaptured in this operation and there are hardly any terrorists left in the region. “Joint forces of 30 countries could not defeat these terrorists but Pakistan army alone has defeated a mass level radical insurgency. This is nothing ordinary. Research papers are being written today in the universities about this marvelous achievement”, said Wajahat.

The show received extraordinary praise from the Twitterati and the public at large.

Nadeem Khan said that Pakistan army is serious about the war.

Roads have been built, peaks have been captured because Pak army is serious about war on terror. #ShawaalKaMahaaz pic.twitter.com/8X25zOsSDI

Hanzla quoted Wajahat s words from the show. This war is for our land, not to conquer enemy s.

The battle is on not to conquer foreign land but to secure what is ours, claims @WajSKhan atop Shawal valley. #ShawaalKaMahaaz

People have hopes today, thanks to our warring soldiers.

I don t have words to explain excellence of @WajSKhan you perform great show #shawaalkamahaaz..

He really made it look easy.

Some thought the time was ripe to take a jibe.

There can be no war without roads, says @WajSKhan on #ShawaalKaMahaaz. Hope CM Shehbaz is listening.

However, the biggest of these battles is not the #ShawaalKaMahaaz. It is the devastated homes of the Temporarily Displaced Persons (TDP), who are forced to live in camps in Peshawar, Bannu and other parts of the country. “This is the real battle. The army has done its job but it is now up to the civilian leaders to sort these matters out. The biggest challenge that we face today is the rehabilitation of the TDPs”, said Wajahat. “We hope that our civil-military institutions will rehabilitate the hundreds of thousands of FATA residents in their homes as soon as possible. Because the real goal of this war is peace”, said Mahaaz. 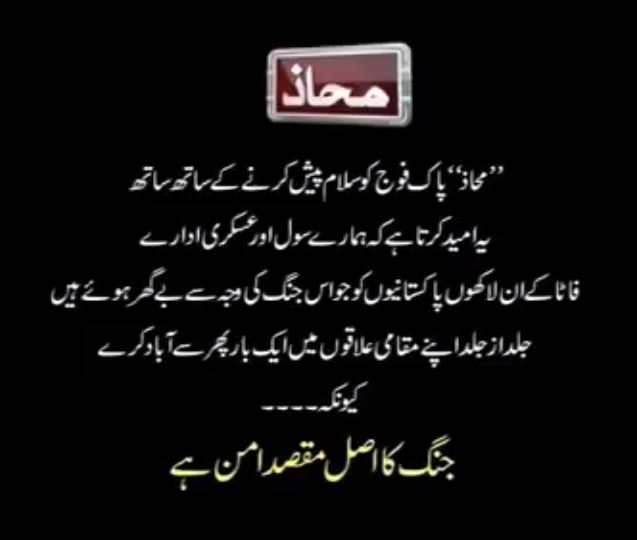