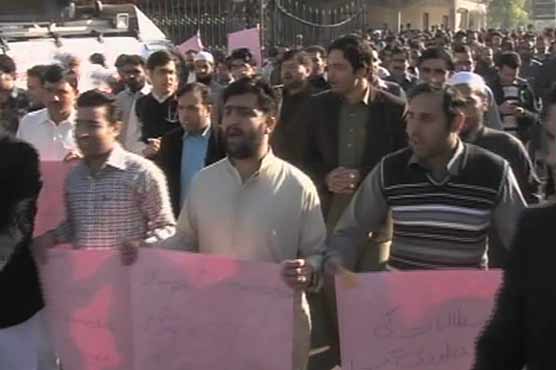 The ailing patients also staged protest against doctors for boycotting the OPDs.

PESHAWAR (Dunya News) – The doctors of Lady Reading Hospital (LRH) on Wednesday has continued to protest on third day by strictly demanding action against paramedics’ torture.

The doctors said that the hospital authorities had beaten them up and threatened them during a clash. They urged the provincial government to ensure stern action against the culprits.

Meanwhile, the ailing patients also staged protest against doctors for boycotting the OPDs and obstructed the main road outside the hospital that disrupted traffic flow.

Earlier on Monday, paramedics staged a protest against the alleged occupation of hostel by the doctors.

The protesters while holding placards demonstrated outside the administration block and proceeded towards the hostel to evacuate it from the doctors on which the situation took a fierce turn.

Police officials reached the scene to seal the hospital.

Both the parties threw stones at each other and when the uproar worsened, police resorted to shelling and baton charged which left seven injured including both the paramedics and doctors whereas six were also taken into custody by the police.