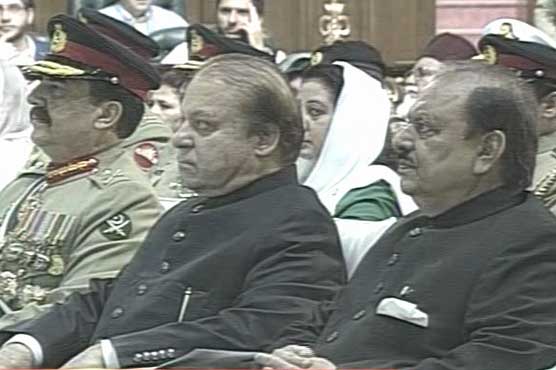 ISLAMABAD (Dunya News) – President Mamnoon Hussain on Friday has said that Pakistan is desirous of resolution of issues with India including Kashmir dispute through talks.

He expressed these views while addressing a leading Independence Day ceremony in the federal capital.

The President said that Pakistan would not compromise over security. He said that the country wants peaceful coexistence with neighbours.

Hussain said that Pakistan’s image has improved due to an effective foreign policy. The President, while talking about war on terror, said that foreign enemies are trying to sabotage country’s peace. He expressed a resolve that the war against terrorism would continue until the country is free of the threat.

The President and the PM hoisted the national flag. The ceremony was started with recitation of verses of the Holy Quran.

Federal ministers who participated include Ishaq Dar, Ahsan Iqbal and Mushahidullah. Adviser to PM on Foreign Affairs and Security Sartaj Aziz was also present. Besides national figures, ambassadors of different countries participated in the ceremony.

Earlier in the morning, 31-gun salute was presented in the federal capital while 21-gun salute in provincial capitals.