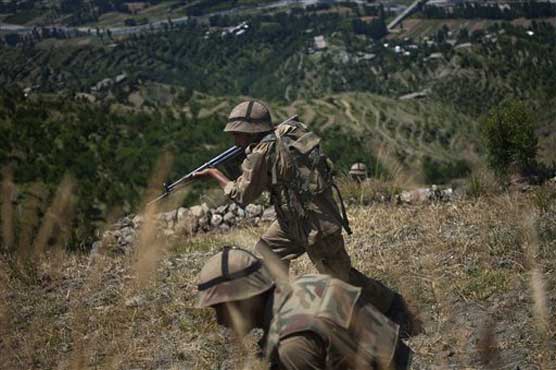 4 soldiers martyred in a clash at the border of North and South Waziristans, 9 terrorists killed

RAWALPINDI: (Dunya News) – 4 soldiers on Saturday embraced martyrdom in a clash with the terrorists on the border of South and North Waziristans. Retaliating, soldiers killed 9 terrorists, reported Dunya News.

According to Inter-Service Public Relations (ISPR), Pakistan Army conducted a search operation at the border of the Southern Waziristan. The operation carried out in Perghar area of Tehsil Ludha started at 1400 hours. 4 soldiers embraced martyrdom during the clash while 9 terrorists were killed.

Many terrorists have been killed during the ongoing operations Zarb-e-Azb and Operation Khyber. Several of them have also been identified as foreigners as well.

Implementation of NAP taking some time due to political challenges: DG ISPR