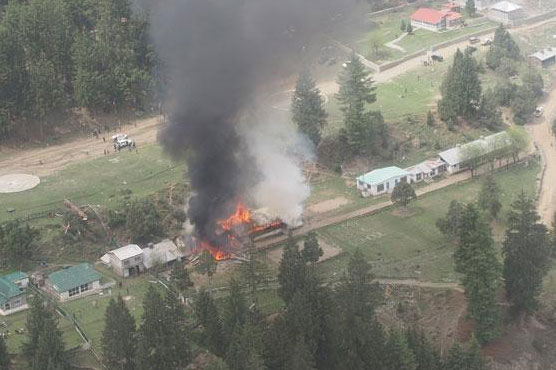 The convoy of helicopters was carrying a delegation of foreign diplomats and their aides to Gilgit.

GILGIT (AFP) - A Pakistani military helicopter crashed into a school in the country`s north Friday, killing seven people including the Norwegian and Philippine ambassadors, and setting the building ablaze, the army said.

The helicopter was one of three carrying a delegation of envoys to inspect projects on a three-day trip to Pakistan s Gilgit-Baltistan territory where they were set to meet with Prime Minister Nawaz Sharif.

Leif H. Larsen, the Norwegian envoy, and Domingo D. Lucenario Jr of the Philippines were killed along with the wives of the Malaysian and Indonesian ambassadors, as well as the helicopter`s two pilots Major Altamash and Major Faisal, according to official tweets by the army.

A senior local administration official warned the situation was "urgent" after the helicopter -- one of three carrying the delegation, their aides and members of the press -- crashed into the school.

Prime Minister Sharif "expressed deep grief and sorrow" over the incident according to a statement issued by his office, which added that he had been on his way to the region but his plane returned to Islamabad after hearing the news.

According to a list of passengers obtained by AFP, the ambassadors of Indonesia, Lebanon, Malaysia, the Netherlands, Romania, Norway, South Africa, the Philippines and Poland were scheduled to fly on the helicopter.

"It was a diplomatic trip with members of 37 countries in total," said a passenger in one of the helicopters, who requested anonymity, adding that the school had caught fire after the crash.

The passenger added that the air convoy was supposed to have included four helicopters but the number was later reduced to three.

A senior local administrative official said: "We have been told to send in as many ambulances as we can because the situation there is  urgent ".

The injured were being air lifted to a military hospital in Gilgit, the region s administrative capital, some 50 kilometres (30 miles) to the southwest, added another senior local police official.

In the city of Gilgit, a hospital official said injured were being carried on stretchers to the emergency ward of the Combined Military Hospital.

Known for its spectacular mountain ranges and unique culture, Gilgit-Baltistan is a strategically important autonomous region that borders China, Afghanistan and Indian-held Kashmir.