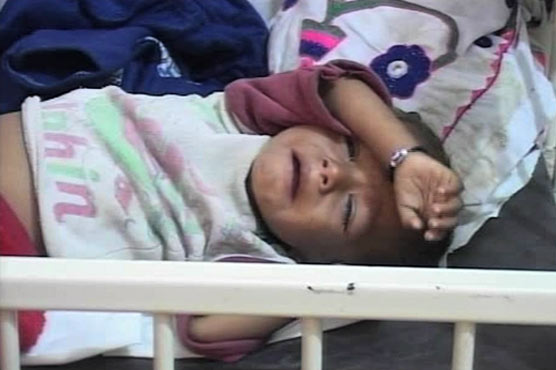 The administration is shouting 'all is well' while people and livestock continue to perish.

THAR (Dunya News) – A 2-year-old child Haider who was brought to Hyderabad from Mithi for treatment died on Saturday as the deadly drought in Tharparkar continues, Dunya News reported.
The death toll caused by the malnutrition has soared to 24.

According to the reports, the government’s relief for the affectees is limited to the urban areas only while most of rural area sees shortages of food, medicines and water.

Several children are lying in hospitals seeking treatment amid lack of facilities. The tall promises and claims of the Sindh government remain unrealized thus far.

Reportedly, the relief items including wheat are being distributed to a select few people in urban areas while the affectees of rural areas await the relief.

According to one estimate, hundreds of livestock are perishing everyday due to the lack of fodder.

Meanwhile, the water crisis in several villages of Chachru is intensifying. The administration is shouting ‘all is well’ while people and livestock continue to perish.