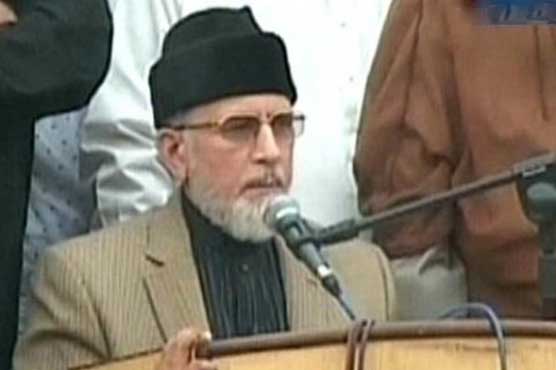 ISLAMABAD (Dunya News) – Pakistan Awami Tehreek (PAT) chief Dr Tahirul Qadri said in his address to the ‘revolution march’ participants that the justice and revenge of martyrs of Model Town tragedy warrants ‘revolution’, Dunya News reported.
Presenting his ‘charter of demands/revolution’, he demanded Prime Minister Nawaz Sharif and Chief Minister Shahbaz Sharif to step down immediately. He demanded law enforcement to take them into custody and try them as per the law and charges.
He demanded Federal Investigation Agency (FIA) to put Sharif brothers on Exit Control List (ECL).
Following is the ‘charter of demands’ presented by Qadri
1 – PM, CM Punjab step down immediately, their government must be overthrown and they must be arrested as per the court of justice.
2 –National Assembly, provincial assemblies must be dissolved because ‘this is unconstitutional,’ citing Article 62 of the constitution. 2/3 members are tax evaders and thieves.
3 – Formation of ‘national government for democratic reforms’ after dissolution of assemblies, this government should be formed with consensus.
4 – Every leader, technocrat, bureaucrat, and public office holder must be put to the accountability by this new government.
5 – The poor of this country should be given 10-point socio-economic package to alleviate poverty
- Housing for homeless
- Food and clothing for everyone
- Necessities must be arranged in three months
- State health policy, free medical treatment
- Free compulsory education to every child, education classes for adults
- Basic necessities must be provided on half the prices
- The first three months’ utility bills will be half; this will be responsibility of national government
- Employment must be provided, especially for women. Women should be empowered economically. Anti-discriminating laws for women must be in place.
- Revision of pay structure, equal distribution of wealth
- Sectarianism, terrorism and extremism must be eliminated from the country. This must be added in the law that no sect can declare the other infidel.

6 - Peace training centers must be established, peace and inter-faith harmony should be added in textbook syllabus of schools.
7 – Minorities be provided with complete rights, equal citizenship no matter what religion they belong to. They will be given constitutional protection.
8 – Devolution… formation of more provinces including Hazara, Gilgit-Baltistan, South Punjab, FATA. At least 23 provinces should be formed for better administration. How and why should people of smaller cities have to travel to major cities for court appearances and other governmental affairs?
9 – Accountability by national government, no corrupt will be allowed to hold a public office or obtain loans, corrupt will be imprisoned.
10 – Same laws for rich and poor, equal prosperity opportunities for poor.