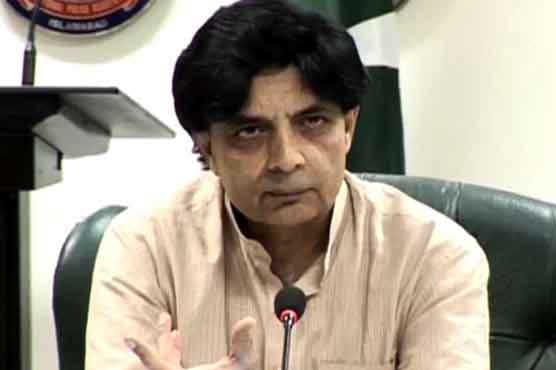 Nisar directed to rid Islamabad and Rawalpindi of militant elements on war-footing.

ISLAMABAD (Dunya News) – Federal Interior Minister Chaudhry Nisar Ali Khan on Saturday imposed ban on holding any kind of rally or public gatherings in the federal capital, while ordering additional security on sensitive areas in the twin cities, Dunya News reported.
A high level meeting chaired by Nisar took place here in Islamabad where the security arrangements of Pakistan Awami Tehreek (PAT) chief Tahirul Qadri’s arrival were reviewed.
Interior Minister directed Commissioner Islamabad to impose a ban on holding any kind of rally or public gathering in Islamabad.
He also directed the law enforcement to carry an intensive search operation of the twin cities Rawalpindi and Islamabad along with the adjacent areas and rid them of the militant elements on war-footing.

Intelligence agencies, Saturday, termed Pakistan Awami Tehreek (PAT) chief Dr Tahirul Qadri’s schedule road travel from Islamabad to Lahore as unsafe. Intelligence report says that Qadri could face severe security dangers upon arrival in Pakistan, Dunya News reported.
According to sources, intelligence agencies alerted the police about the potential threat. The report says that Qadri’s road travel from Islamabad to Lahore is extremely dangerous.
Sources say that PAT workers will not be allowed to welcome Qadri at the airport. Police has also alerted Minhaj-ul-Quran’s local leadership about the security risk.
In an important meeting between police and local administration, it was decided that police will also perform the joint security duty alongside the rangers.
As many as ten thousand police personnel from the twin cities will be deployed on the express way whereas the recommendation to seal the roads leading to the airport is also under consideration.