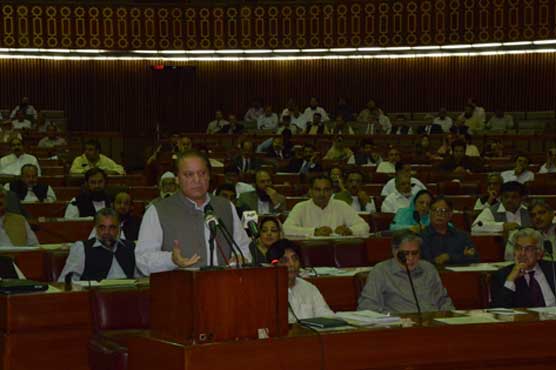 The PM has directed officials concerned to make necessary arrangements for the IDPs.

ISLAMABAD (Dunya News) - Prime Minister Nawaz Sharif will take the political parties into confidence on Monday (today) about the military operation Zarb-e-Azb launched in North Waziristan Agency against the militants.

According to the sources, Prime Minister Nawaz Sharif would attend the National Assembly session today and would take leaders of political parties on the ongoing military operation against the militants.

The sources said that the PM has expressed satisfaction about the initial outcome of the operation and arrangements made for the occasion.

They said that Prime Minister Nawaz Sharif has also directed the officials concerned to make necessary arrangements for the displaced people of the area.

Meanwhile, Ministry of Finance has vowed to facilitate security forces to end curse of terrorism from the country.
According to Finance Ministry sources, the national economy has suffered more than $105 loss in the war against terrorism and the nation cannot bear the burden of more losses.

MQM chief Altaf Hussain endorsed and welcomed the government’s decision to carry out a military offensive against the militants in North Waziristan. He prayed for the success and wellbeing of the army men saying may God guide them.

He said he assures his party’s unconditional support to the army once again, adding that every worker of MQM is alert in support of the army and awaits army’s signal.

Sindh Information Minister Sharjeel Memon said that the government has taken correct decision, adding that his party will fully support the army and the government.

Former Interior Minister Rehman Malik said that Pakistan needs the support of Afghanistan and United States of America at this time so that the enemy could not seek refuge in the neighbor country.

PTI spokesperson Shireen Mazari said that party’s core committee’s meeting has been summoned where a decision in this regard will be taken.

Jamaat Islami leader Liaquat Baloch said that he expected the government to take the parliament into confidence before making such a decision.

Pakistan Army on Sunday launched a comprehensive operation against foreign and local terrorists upon direction of the government. The operation has been named ‘Zarb-e-Azb’, literally ‘sharp strike/sharp cutting’ and will target the terrorist hideouts in North Waziristan, Dunya News reported citing ISPR sources.

The operation name ‘Zarb-e-Azb’ means ‘sharp strike/sharp cutting.’ Azb is also the name of sword used by Prophet Mohammad (pbuh) in one of the battles.

“Using North Waziristan as a base, these terrorists had waged a war against the state of Pakistan and had been disrupting our national life in all its dimensions, stunting our economic growth and causing enormous loss of life and property,” ISPR press release said.