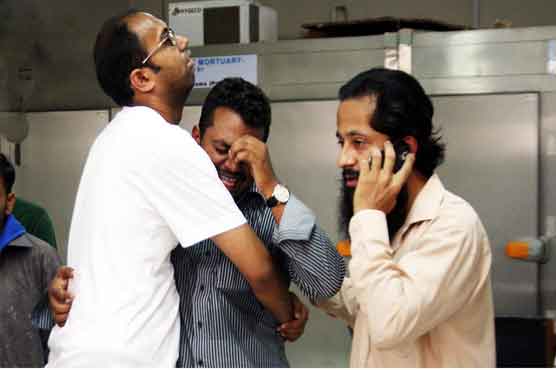 Three robbers were also killed in encounters and four accused were arrested from different areas.

KARACHI (Dunya News) - At least four persons were killed in separate incidents of firing and violence in the city on Thursday.

Some unidentified motorcyclists opened firing on a rickshaw and killed two persons. According to police, the victims, identified as Shahkar Ali and Zufiqar Ali, were real brothers and employees of Karachi Electric Supply Company (KESC).

A man was shot dead in Dubai Chowk area of Lyari while a dead body was found near fisheries. The victim was gunned down by some unknown persons.

On the other hand, two robbers were killed in alleged police encounter in Cheel Chowk area of Lyari. According to police, the robbers opened firing on police party during checking and were killed in retaliation by policemen. The dead could not be identified.

Meanwhile, another robber was also killed in alleged police encounter in New Karachi area. Police arrested an accused from Korangi Industrial Area and recovered weapons from his possession. The accused was identified as Zaheer alias Chotta Munna who is was an activist of a political.