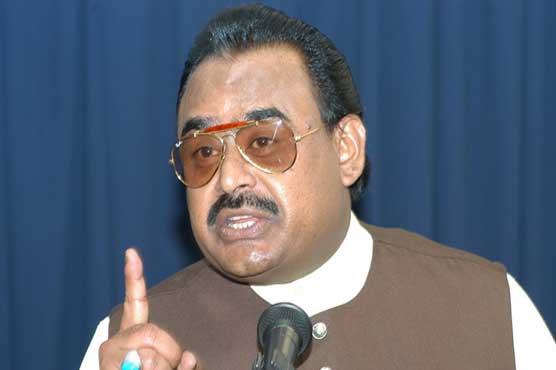 The MQM chief says killers of innocent people are enemies of Islam and humanity.

In a statement issued on Friday, he said those killing innocent people on the occasion of Jumma prayer were enemies of Islam and humanity and wanted to destabilize Pakistan through terrorism and bloodshed.

He said that the government was holding talks with terrorists instead of taking action against them that not more than a joke with the nation.

The MQM chief said that the nation cannot get rid of militancy and terrorism until a stern action is taken against these terrorists.

Earlier, At least four people were killed and 30 others injured in a bomb blast in Defence area of Karachi.
The explosion took place outside a mosque in Delhi Colony area. Several vehicles and a nearby multi-story building were badly damaged.

According to sources, two government vehicles with the registration number GS-7558 and GS-5758 were badly damaged in the incident.

Talking to media, Sindh Information Minister Sharjeel Memon said that three government vehicles were damaged in the attack and that these vehicles were the apparent target of the attacker.

Later, bomb disposal squad has arrived at the scene to ascertain nature of the explosion. Injured people were shifted to Jinnah Hospital for treatment. Provincial Health Minister, Dr Sagheer Ahmed told the media five of the injured were in critical condition.

No one claimed responsibility, but the attack took place a day after a bomb targeting prominent police officer Shafiq Tanoli exploded in another area of Karachi, killing the officer and three others.

The slain officer, who had survived several attempts on his life, was targeted for his active campaigning against terrorists.

The blast also comes as Pakistan government pursues peace talks with the Taliban.