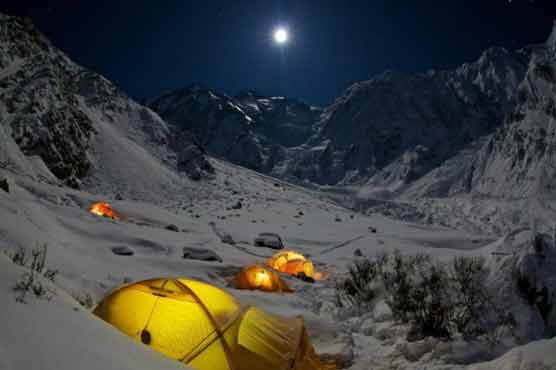 The Pakistani military evacuated 34 tourists Monday on a C-130 aircraft that flew them to Islamabad.

For years, intrepid climbers and mountaineers, lured by a collection of awe-inspiring peaks, were some of the only international tourists willing to come to Pakistan. The region has also attracted Pakistanis looking for a respite from the summer heat in the southern part of the country.

Now hotel owners, tour operators and tourism officials worry that may be in danger after the vicious attack by militants Saturday on the climbing group at the base camp of Nanga Parbat, the second highest peak in Pakistan and the ninth highest in the world.

"The impact is huge," said Ghulam Nabi Raikoti, one of two brothers who run Raikot Serai, a resort in an area of northern Pakistan called Fairy Meadows. From the hotel's cottages and tents, visitors can look up at the face of Nanga Parbat, which has been nicknamed the "killer mountain" for the number of people who've died trying to climb its 8,126-meter (26,660-foot) peak.

Raikoti said a tour group of 50 Pakistani students already cancelled a stay at the resort.

Pakistan has been beset by militancy for years, but this attack will likely be especially disruptive to tourism because it struck foreign tourists in what is usually one of the most peaceful regions of the country.

The attack also demonstrated a high degree of planning. Just getting to the base camp takes roughly two days of hiking. The militants, disguised in paramilitary uniforms, first abducted two local Pakistanis to take them to the remote camp in Gilgit-Baltistan.

Late Saturday night, a group of about 15 gunmen attacked the camp, beat the mountaineers and took away mobile and satellite phones and money. Some climbers and guides were able to run away, but those that weren't were shot dead.

By the end, 10 foreign tourists and a Pakistani cook employed by a tour company were killed.

A faction of the Pakistani Taliban has claimed responsibility for the shootings.

The remaining mountaineers who were at camps higher up on Nanga Parbat when the shooting happened have been evacuated to allow the authorities to freely comb the area for the suspects, said the president of the Alpine Club of Pakistan, Manzoor Hussain.

"In that area it is difficult for someone to hide," said Hussain, who added that there will be no more expeditions to Nanga Parbat this summer.

The Pakistani military evacuated 34 tourists Monday on a C-130 aircraft that flew them to Islamabad, said Muhammed Ajmal Bhatti, deputy commissioner of Diamer District near where the shootings happened; about a dozen left on Sunday. They were also evacuating the porters, guides and other Pakistanis from the area.

Meanwhile, those associated with the tour industry, including tour operators affected by the tragedy, faced worried customers.

Mohammed Ali, owner of Karakoram Magic Mountain, with which the slain cook was working, said a trekking tour expected later this summer was already in doubt.

"I don't know if they will come or not. Last night they sent emails to me, and they want to know more information about this incident," he said.

Anyone planning to climb a peak 6,500 meters or higher or those climbing in sensitive areas, needs a climbing permit from the government of Pakistan, said Abu Zafar Sadiq, secretary of the Alpine Club of Pakistan.

Thousands of families in Gilgit-Baltistan depend on the seasonal tourist trade. Families often work for three to four months in the summer and then live off that income for the rest of the year.

At one point in the 1990s, about 120 to 150 climbing expeditions received permits each summer to climb in the northern region, but that number plummeted to about 20 or 30 after the Sept. 11, 2011 attacks in the United States, said Tayyab Mir, manager for publicity and promotion at the Pakistan Tourism Development.

In the ensuing years, a series of terrorist attacks, military offensives, and natural disasters has largely kept tourists away. But in recent years, officials said they had started to see a slight uptick in tourism. So far, 50 groups had applied for climbing permits in 2013, said Sadiq.

Now even that subtle gain seems to be in danger. A fresh threat from the militant group that claimed responsibility for the shooting is likely to even further worry prospective tourists.

In a phone call to The Associated Press, a spokesman for Junudul Hafsa, a faction of the Pakistani Taliban, said they will continue attacks against foreign tourists, especially those from Europe and the U.S., until drone attacks in the tribal regions are stopped.

"These attacks will become more aggressive and frequent," said the spokesman who identified himself as Abdullah Ghazi.