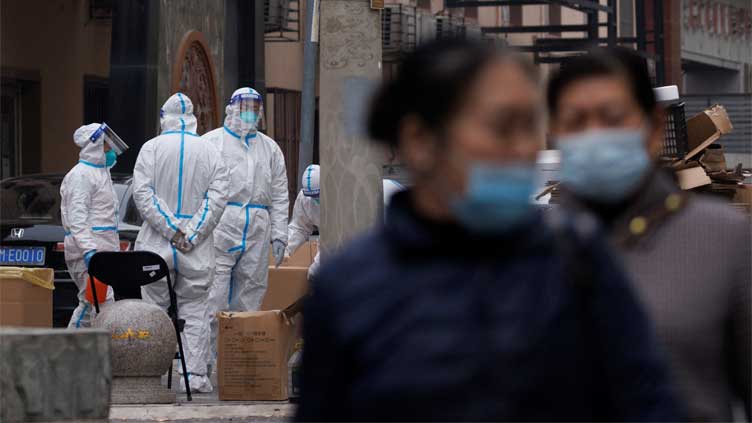 BEIJING (Reuters) - China’s capital warned on Monday that it was facing its most severe test of the COVID-19 pandemic, shutting businesses and schools in hard-hit districts and tightening rules for entering the city as infections ticked higher in Beijing and nationally.

China is fighting numerous COVID-19 flare ups, from Zhengzhou in central Henan province to Chongqing in the southwest. It reported 26,824 new local cases for Sunday, nearing the country’s daily infection peak in April.

It also recorded two deaths in Beijing, up from one on Saturday, which was China’s first since late May.

Guangzhou, a southern city of nearly 19 million people that is battling the largest of China’s recent outbreaks, ordered a five-day lockdown for Baiyun, its most populous district. It also suspended dine-in services and shut night clubs and theatres in the city’s main business district.

The latest wave is testing China’s resolve to stick to adjustments it has made to its zero-COVID policy, which calls for cities to be more targeted in their clampdown measures and steer away from widespread lockdowns and testing that have strangled the economy and frustrated residents.

Asian share markets and oil prices slipped on Monday amid investor concern over the economic fallout from the intensifying COVID situation in China, with the risk aversion benefiting bonds and the dollar.

Beijing reported 962 new infections on Sunday, up from 621 a day earlier, and a further 316 cases for the first 15 hours of Monday.

City authorities said people arriving in the capital from elsewhere in China would need to undergo three days of COVID testing before they are permitted to leave their homes or accommodation.

"The city is facing its most complex and severe prevention and control situation since the outbreak of the coronavirus," Liu Xiaofeng, the deputy director of Beijing’s municipal Centre for Disease Control and Prevention, told a media briefing.

Residents in Beijing’s sprawling Chaoyang district, home to 3.5 million people as well as embassies and office complexes, were urged to stay home, with schools going online.

Streets were unusually quiet, and stores in the district other than those selling groceries appeared mostly shut.

Restaurants were empty but for one or two staff huddled at entrances around small tables showing "takeout only" signs.

"You can’t go anywhere. Everything’s closed. Customers cannot come, either. What can you do? You can do nothing," said Jia Xi, 32, a medical industry salesman.
Staff at building entrances carried out strict checks of mobile phone health apps with the command now familiar to all Beijingers: "Scan the code!"

Several Chinese cities began cutting routine community COVID-19 testing last week, including the northern city of Shijiazhuang, which became the subject of fervent speculation that it could be a test bed for policy relaxation.

But late on Sunday, Shijiazhuang announced it would conduct mass testing in six of its eight districts over the next five days after new daily local cases hit 641. It also encouraged residents to shop online and ordered some schools to suspend in-person teaching.

"They lasted a week," said one popular comment on Weibo on Shijiazhuang’s curbs, which was among the most viewed topics on the social media platform.

The People’s Daily newspaper, the official organ of China’s ruling Communist Party, on Monday published an article reiterating the need to catch infections early but to avoid taking a "one-size-fits-all" approach, its eighth such piece since China announced its 20 adjusted measures on Nov. 11.

Many analysts expect such a shift to begin only in March or April, however, with the government arguing that President Xi Jinping’s signature zero-COVID policy saves lives and is necessary to prevent the healthcare system being overwhelmed.

Experts argue full reopening requires a massive vaccination booster effort and a change in messaging in a country where the disease remains widely feared. Authorities say they plan to build more hospital capacity and fever clinics to screen patients and are formulating a vaccination drive.

Oxford Economics said it only expects an exit from zero-COVID in the second half of 2023, with vaccination rates for the elderly still comparatively low.
"From an epidemiological and political perspective, we do not think the country is ready yet to open up," it said in a Monday report.