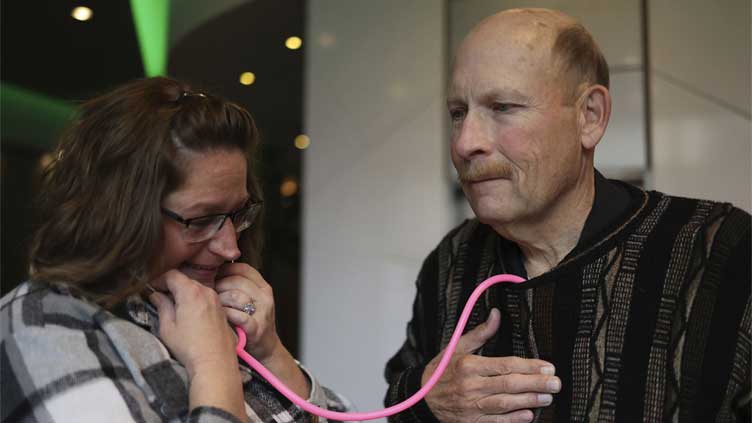 CHICAGO (AP) — An Indiana woman heard the heartbeat of her late daughter inside the chest of a 68-year-old Illinois man who received it in a transplant operation.

Amber Morgan and Tom Johnson met for the first time Saturday, four years after he received a heart transplanted from the body of Andreona Williams, who was 20 when she died from asthma complications.

The Indiana Donor Network arranged the rare meeting at a Chicago hotel, the Chicago Tribune reported.

Morgan listened through a stethoscope that was pressed to Johnson’s chest.

“It’s almost like I got to hug my daughter again,” the South Bend, Indiana, woman said.

“As a mother, you listen to your child’s heartbeat when you carry them, and I don’t think you ever ask to hear it again,” Morgan said. “It’s amazing.”

Johnson of Kankakee, Illinois, said he sent a letter to Morgan in 2019, a year after the transplant at Loyola University Medical Center in suburban Chicago. He wanted to express his gratitude for the family’s decision to donate the heart.

He sent a second letter, too, but did not get a response until recently when Morgan said she would like to meet, especially after her own heart problems.

Johnson had dealt with a weak heart since childhood. Doctors tried a pacemaker and defibrillator before telling him that a transplant was the best solution.

“It opened up a whole new world of possibilities,” Johnson said. “It’s just unbelievable. I mean, I can work out in the garden, ride the bike. My sons can’t believe how quick I can go.”

“He takes very special care of her,” she said. “He never misses his heart medication. Never.”