Preliminary evidence suggests there may be an increased risk of reinfection with Omicron.

(Reuters / AFP / Web Desk) - After a frantic weekend of headlines about the new COVID Omicron variant, global governments are racing to assess the risk of this new strain which has already been detected in many countries. Scientists say it could take weeks, and some are preparing for the worst.

Israel and Japan, for example, have closed down their borders to foreigners. Other countries are reimposing travel and social distancing measures. 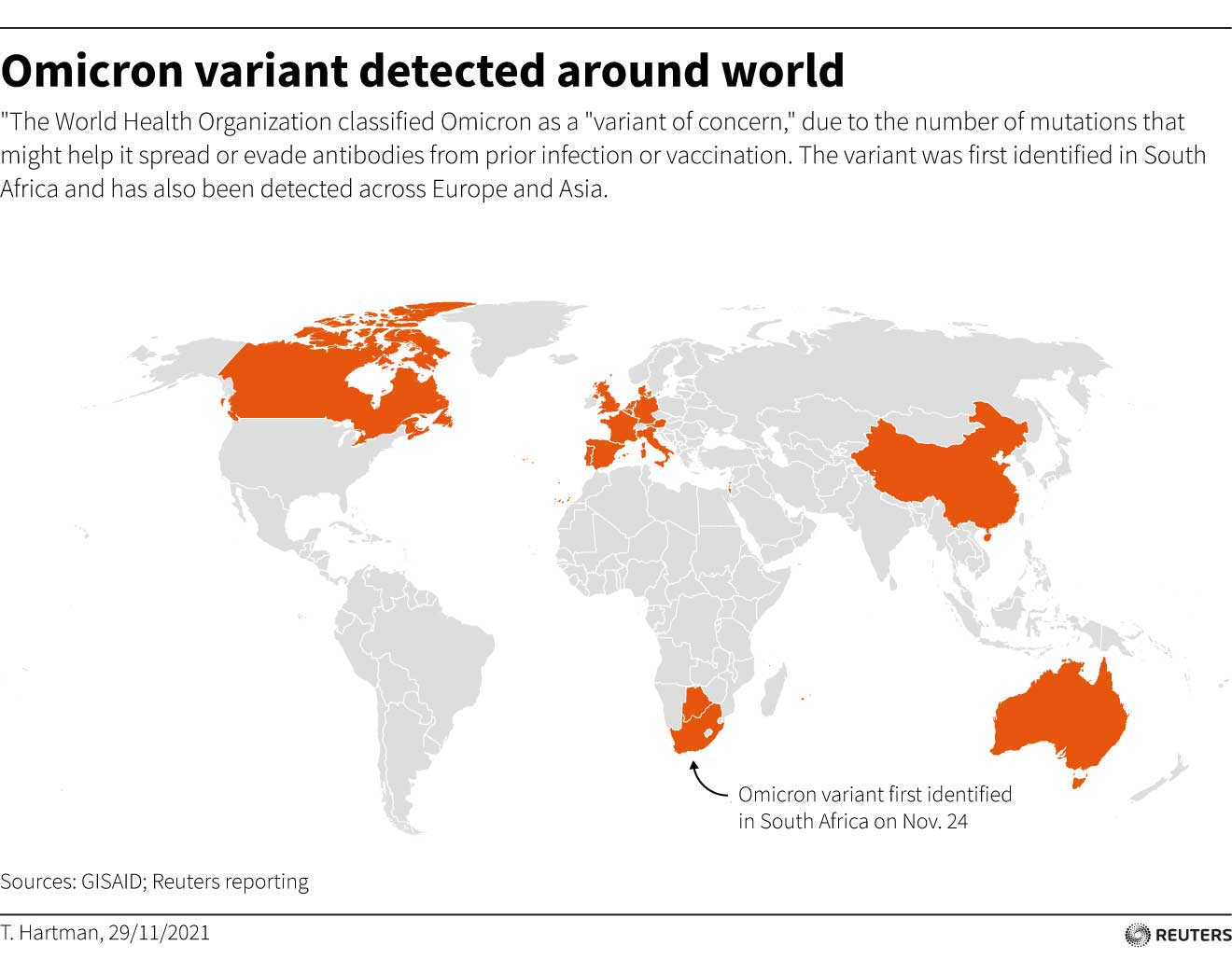 But as of Monday (November 29) afternoon there have been no known deaths directly linked to Omicron.

And in South Africa - part of the region where Omicron was first detected - government advisers including a Columbia University disease expert are saying vaccines should still be a major safeguard against it.

According to WHO, researchers in South Africa and around the world are conducting studies to better understand many aspects of Omicron and will continue to share the findings of these studies as they become available.

Transmissibility: It is not yet clear whether Omicron is more transmissible (e.g., more easily spread from person to person) compared to other variants, including Delta. The number of people testing positive has risen in areas of South Africa affected by this variant, but epidemiologic studies are underway to understand if it is because of Omicron or other factors.

Severity of disease: It is not yet clear whether infection with Omicron causes more severe disease compared to infections with other variants, including Delta. Preliminary data suggests that there are increasing rates of hospitalization in South Africa, but this may be due to increasing overall numbers of people becoming infected, rather than a result of specific infection with Omicron. There is currently no information to suggest that symptoms associated with Omicron are different from those from other variants. Initial reported infections were among university students—younger individuals who tend to have more mild disease—but understanding the level of severity of the Omicron variant will take days to several weeks. All variants of COVID-19, including the Delta variant that is dominant worldwide, can cause severe disease or death, in particular for the most vulnerable people, and thus prevention is always key.

Effectiveness of prior SARS-CoV-2 infection

Preliminary evidence suggests there may be an increased risk of reinfection with Omicron (ie, people who have previously had COVID-19 could become reinfected more easily with Omicron), as compared to other variants of concern, but information is limited. More information on this will become available in the coming days and weeks.

Effectiveness of current tests: The widely used PCR tests continue to detect infection, including infection with Omicron, as we have seen with other variants as well. Studies are ongoing to determine whether there is any impact on other types of tests, including rapid antigen detection tests.

Effectiveness of current treatments: Corticosteroids and IL6 Receptor Blockers will still be effective for managing patients with severe COVID-19. Other treatments will be assessed to see if they are still as effective given the changes to parts of the virus in the Omicron variant.

Given the continuous evolution of the virus that leads to SARS-CoV-2 and the constant developments in our understanding of the impacts of variants, these working definitions may be periodically adjusted. When necessary, variants not otherwise meeting all criteria outlined in these definitions may be designated as VOCs/VOIs/VUMs, and those posing a diminishing risk relative to other circulating variants may be reclassified, in consultation with the Technical Advisory Group on Virus Evolution (formally called the Virus Evolution Working Group), the WHO reported.

Updates on SARS-CoV-2 classifications, the geographic distribution of VOCs, and summaries of their phenotypic characteristics (transmissibility, disease severity, risk of reinfection, and impacts on diagnostics and vaccine performance) based on published studies, are regularly provided in the WHO Weekly Epidemiological Updates.

A SARS-CoV-2 variant that meets the definition of a VOI (see below) and, through a comparative assessment, has been demonstrated to be associated with one or more of the following changes at a degree of global public health significance:

Increase in transmissibility or detrimental change in COVID-19 epidemiology; OR

Increase in virulence or change in clinical disease presentation; OR 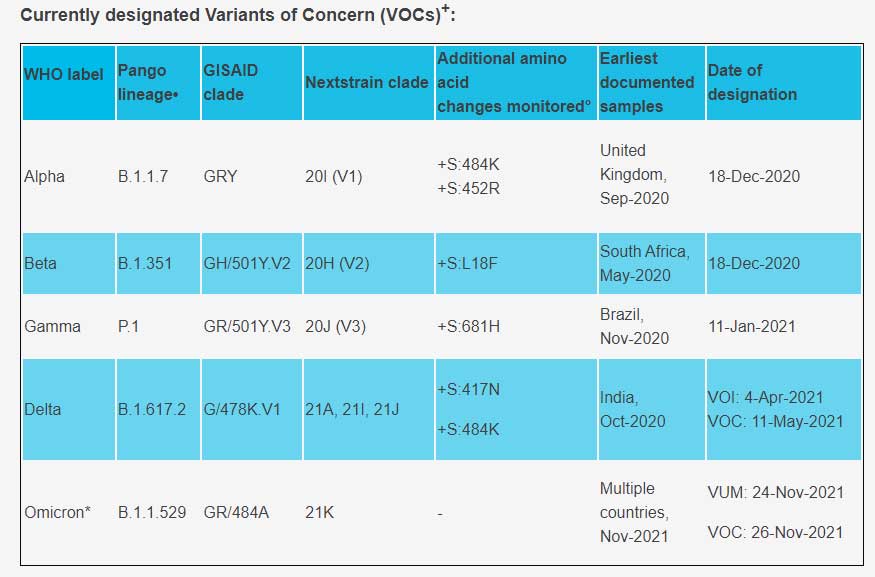 A SARS-CoV-2 variant with genetic changes that are predicted or known to affect virus characteristics such as transmissibility, disease severity, immune escape, diagnostic or therapeutic escape; AND Identified to cause significant community transmission or multiple COVID-19 clusters, in multiple countries with increasing relative prevalence alongside increasing number of cases over time, or other apparent epidemiological impacts to suggest an emerging risk to global public health.

The new Covid variant Omicron has many more mutations than the Delta variant, according to a first "image" of this new variant initially detected in South Africa, produced and published by the prestigious Bambino Gesu hospital in Rome.

On the three-dimensional "image", which looks like a map, "we can clearly see that the Omicron variant presents many more mutations than the Delta variant, concentrated above all in one area of the protein that interacts with human cells", the team of researchers said in a statement Sunday.

"This does not automatically mean that these variations are more dangerous, just that the virus has further adapted to the human species by generating another variant," the researchers said.

"Other studies will tell us if this adaptation is neutral, less dangerous or more dangerous," they added.

The research team focused on the search for mutations in "the three-dimensional structure of the spike protein", Claudia Alteri, professor of clinical microbiology at Milan State University and a researcher at Bambino Gesu, told AFP.

The image was produced "from the study of the sequences of this new variant made available to the scientific community" coming mainly "from Botswana, South Africa and Hong Kong".

"This image, which represents a map of all the variations, describes the mutations of Omicron but does not define its role," she said.

"It will now be important to define through laboratory experiments whether the combination of these mutations can have an impact on transmission or on the effectiveness of vaccines, for example," she added.

How to protect yourself and others:

The WHO advises the following steps to protect yourself and prevent the spread of COVID-19.

Get vaccinated as soon as it’s your turn and follow local guidance on vaccination.

Keep physical distance of at least 1 metre from others, even if they don’t appear to be sick. Avoid crowds and close contact.

Wear a properly fitted mask when physical distancing is not possible and in poorly ventilated settings.

Clean your hands frequently with alcohol-based hand rub or soap and water.

Cover your mouth and nose with a bent elbow or tissue when you cough or sneeze. Dispose of used tissues immediately and clean hands regularly.

If you develop symptoms or test positive for COVID-19, self-isolate until you recover.