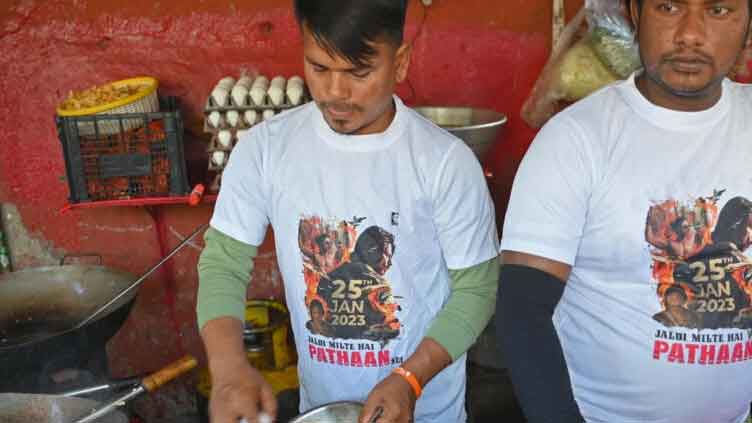 New Delhi (AFP) – Bollywood megastar Shah Rukh Khan returned to the silver screen Wednesday for the first time in four years with a big-budget action movie that has sparked ire from Hindu right-wingers.

Khan, 57, is among India s biggest stars boasting a fan following of millions at home and abroad.

Also popularly known as "King Khan" and "Badshah", he has been ruling Bollywood for more than 30 years.

But he is making a comeback to the big screen after a string of personal and professional setbacks.

His last mega release "Zero" in 2018 was a flop at the box office and his son was arrested last year in a drugs-related case which was later dropped.

The countdown to "Pathaan" has been mired in controversy with hardline Hindu groups protesting over one of its racy songs in which Padukone is seen in a saffron-coloured bikini.

Saffron is a colour associated with Hindu religion and is considered sacred. Khan is from India s Muslim minority.

There were calls to ban the film unless the song was removed.

Shouting slogans, they also burnt the posters of the movie.

Similar protests were held in the eastern state of Bihar on Tuesday and in Assam last Friday.

Despite the negative publicity and controversial build-up, the movie opened to a massive response from the audience across the country.

Despite the negative publicity and controversial build-up, the movie opened to a massive response from the audience across the country

NDTV news network said that record advance bookings of over 500,000 tickets had been made for its first day.

Khan, who plays the role of a suave spy with tousled long hair and washboard abs, said that 25 single-screen cinemas across the country were reopening Wednesday, thanks to the movie.

"Growing up I only watched films in single screens. It is uniquely enjoyable," he said in Hindi on Twitter on Tuesday.

"I pray that you and I both are successful. Congratulations on your reopenings."

Bollywood has been struggling in recent years to produce the kind of major money-spinning blockbusters that have made it so successful in India and further afield.

Its Hindi-language output is also facing a tough challenge from films made in other languages such as "RRR" which this month won a Golden Globe and was on Tuesday nominated for an Oscar for best original song.

"#Pathaan has it all: Star power, style, scale, songs, soul, substance and surprises…," he tweeted.

"And, most importantly, #SRK, who s back with a vengeance… Will be the first #Blockbuster of 2023."