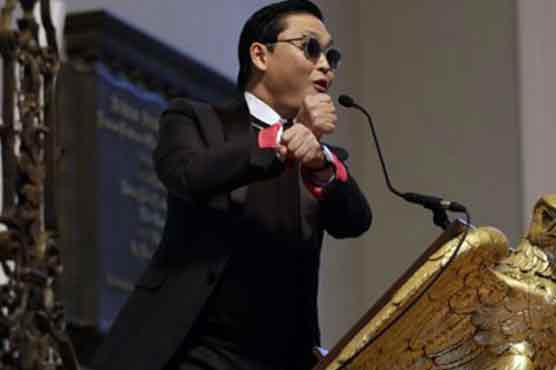 PSY cracked jokes throughout this speech.

CAMBRIDGE (AP) - South Korean rapper PSY was welcomed to Harvard University on Thursday night by dozens of screaming and shouting students and fans, as the "Gangnam Style" star participated in a conversation inside an ornate church dedicated to the memory of those who lost their lives in World War I.

PSY began addressing students and faculty by noting that his presence at the Ivy League school "is so weird."

He recalled spending four years studying management at Boston University while marveling at Harvard from afar. He joked about his academic performance while at school in Boston, saying he was known by a nickname of WWF which, he said, stands for withdrawal, withdrawal, failure.

The pop star, whose real name is Park Jae-sang, also joked that he's heard that he is the first person to make a speech at Harvard without a written script.

PSY cracked jokes throughout this speech and said he was very shocked as his "Gangnam Style" video went viral. He said he was overwhelmed by its success and doesn't realistically expect to replicate the feat.

"Gangnam style was not normal. Gangnam was not standard that was an accident and accidents don't happen often," he said.

PSY wondered aloud why American TV news shows start so early, joking that he had a brutal experience waking up early for rehearsal for appearances on morning news shows.

He also recalled joining Madonna for rehearsal, saying he was surprised when she told him that he can touch her body anywhere while they were on stage.