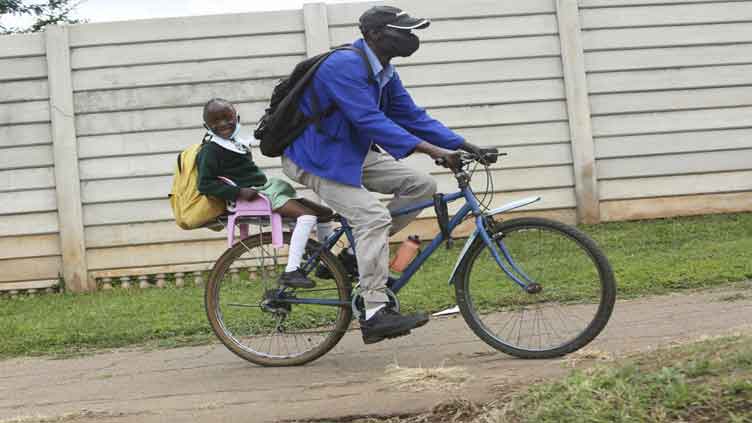 HARARE (AP) — A teachers’ strike has paralyzed learning at many Zimbabwean schools, which opened this week after a prolonged closure due to the COVID-19 pandemic.

In Harare, some schools managed to open Thursday while at others a few teachers reported for work but did not teach, according to unions. The government denounced the strike as “unwarranted conduct” that is depriving children of their right to education.

Many teachers decided to stay at home to protest salaries of about $100 a month. They are demanding that their pay be increased to about $500 per month.

In 2018, teachers earned the equivalent of about $540 a month but that amount has been eroded by years of inflation, currently estimated at 60%, and the devaluation of Zimbabwe’s currency.

In response, the government has offered a 20% pay increase, payment of part of the teachers’ salaries in U.S. dollars, and subsidies on the purchases of cars and houses.

The government also threatened to cut the salaries of those not reporting for duty. Unions have rejected the government offer, saying the proposed pay rise is too low. Union officials also said they doubt the government will deliver on the promises of cheaper houses and duty-free importation of cars, citing the failure of previous pledges.

They added that teachers cannot afford to purchase cars, even with the subsidies. “Teachers have been reduced to paupers, they are living in poverty. Teachers can’t even afford to pay school fees in the schools where they ordinarily teach,” Obert Masaraure, president of the vocal Amalgamated Rural Teachers Union of Zimbabwe told The Associated Press.

“They need almost eight months of their salaries to pay for school fees alone. Teachers are fasting to send a child to school,” he said. Zimbabwe has about 140,000 government school teachers for 4.6 million students.

The southern African country closed schools for almost 6 months when it detected its first COVID-19 case in March 2020. Since then, schools have been intermittently closed, often for prolonged periods, due to the pandemic.

Classes were supposed to start in January but the government, citing the surge of omicron cases, only reopened schools this week, following intense pressure from people tired of keeping children at home or without money to pay for online lessons.
In Chitungwiza, a working-class center about 30 kilometers (18 miles) southeast of the capital, Harare, schools were eerily quiet, with no sign of teachers or pupils.

At some schools, classrooms were locked. At one school, a few children played soccer and other games in overgrown grass in the morning to pass time. Some dozed off on the school grounds while others trooped back home.

Parents were riled, but many said they understood the plight of the teachers. “We are just coming out of lockdowns and now the schools are open but no learning is taking place. What kind of future are we building for our children?” said Edmore Chise, a parent.

“The government should respect teachers, these teachers have families, they also have to pay school fees for their own children,” he said, dropping off his daughter at a school on the outskirts of central Harare.

Security guards took the temperatures of masked pupils, who proceeded to wash their hands under taps of running water. Teachers must be vaccinated, according to a vaccine mandate that orders all government employees to be vaccinated to be allowed to access work stations.

The teachers’ demand for higher pay comes as many other Zimbabweans struggle with widespread poverty. After years of economic decline and the collapse of many businesses offering formal employment, more than 60% of Zimbabwe’s 15 million people survive by selling goods on the streets, offering services from their homes or are otherwise self-employed, according to the International Monetary Fund.

More than half the population lives in extreme poverty exacerbated by COVID-19, according to a joint survey by the government, the World Bank and the United Nations children’s agency.

Many grocery shops and services - such as electricity and water which must be purchased privately — demand payment in U.S dollars. To pay for such necessities, civil servants such as teachers have to buy the greenbacks at exorbitant prices from illegal traders due to a shortage of hard currency in banks.

The latest disruption is worsening the situation of children, especially ones from poor families already devastated by the pandemic, said Masaraure, the union leader.

“When schools were closed those who accessed online education were just a few. The learners have missed out on learning,” he said. “There is an ongoing academic genocide. We are losing a whole generation that is now engaged in child marriages because they can’t be in school.”