KARACHI (Dunya News) – Security forces on Monday have foiled an attack on Pakistan Stock Exchange (PSX) in Karachi and killed all four terrorists. One sub inspector and three security guards have also embraced martyrdom in the incident.

Receiving information about the mishap, contingents of Rangers and police arrived at the scene and killed all four terrorists in retaliation. 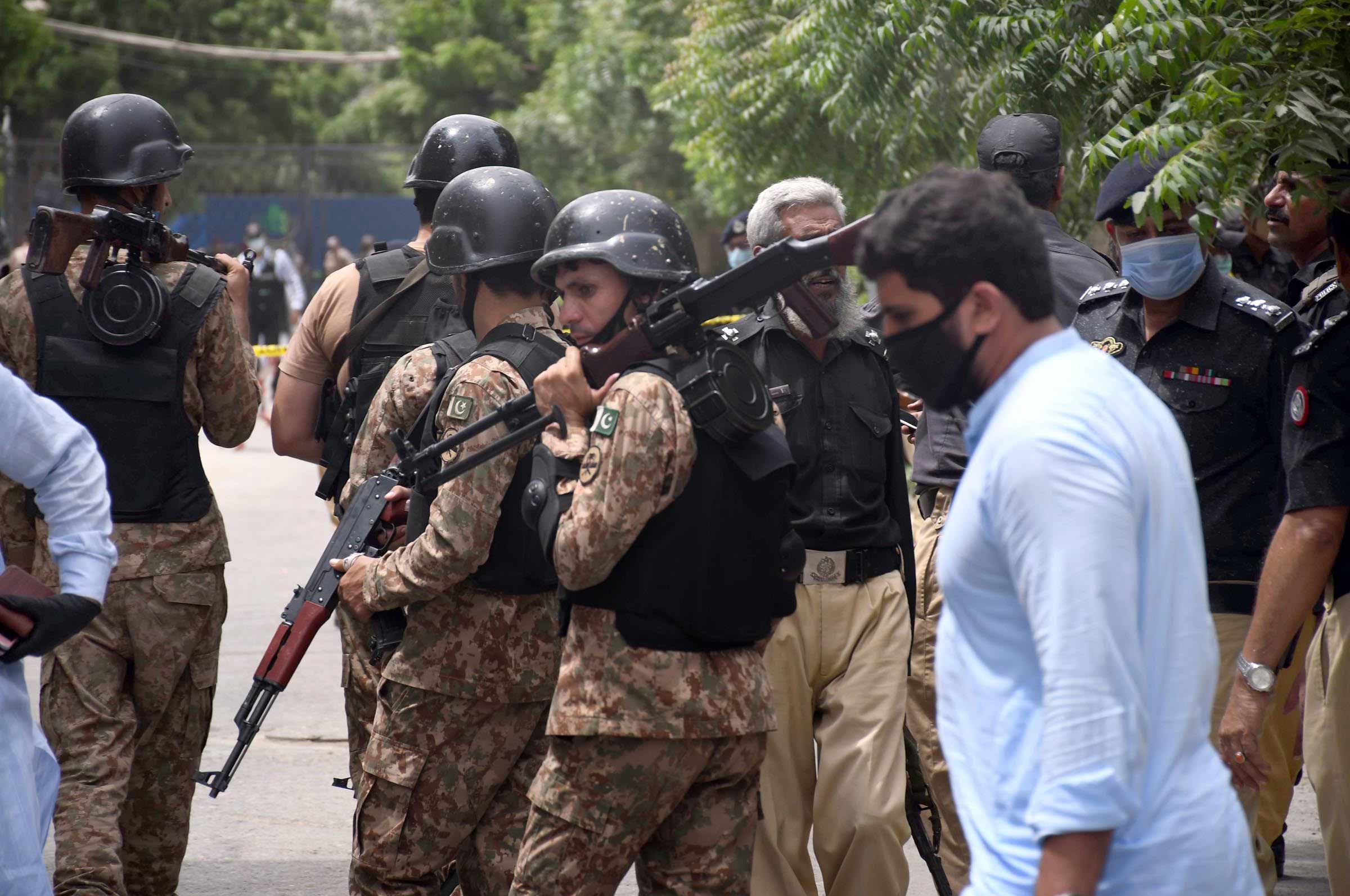 He told that fake number plate car, advanced weapons and hand grenades have also been recovered from the assailants, identified as Tasleem Baloch, Shahzad Baloch, Salman and Siraj.

A clearance operation is underway in the vicinity. 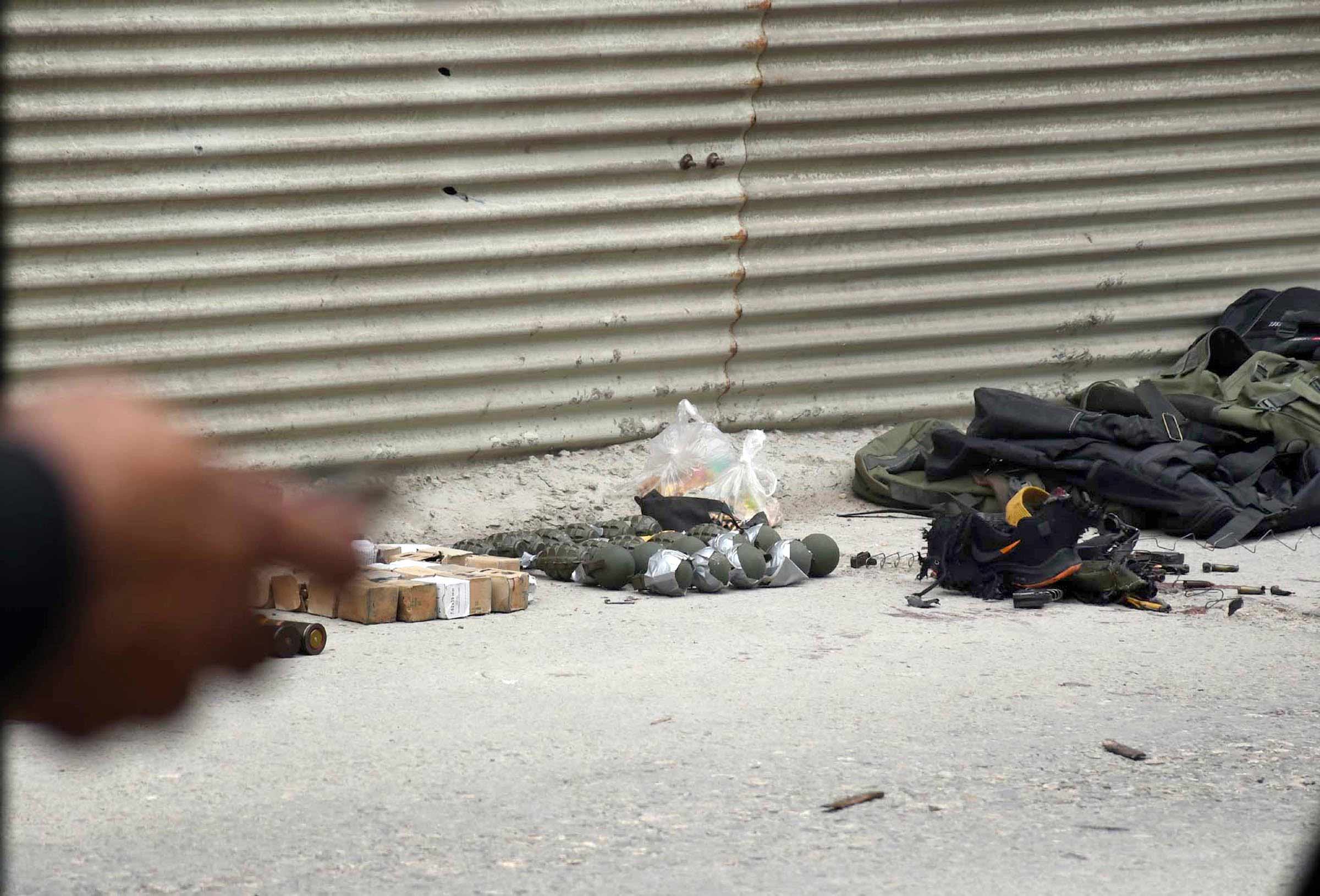 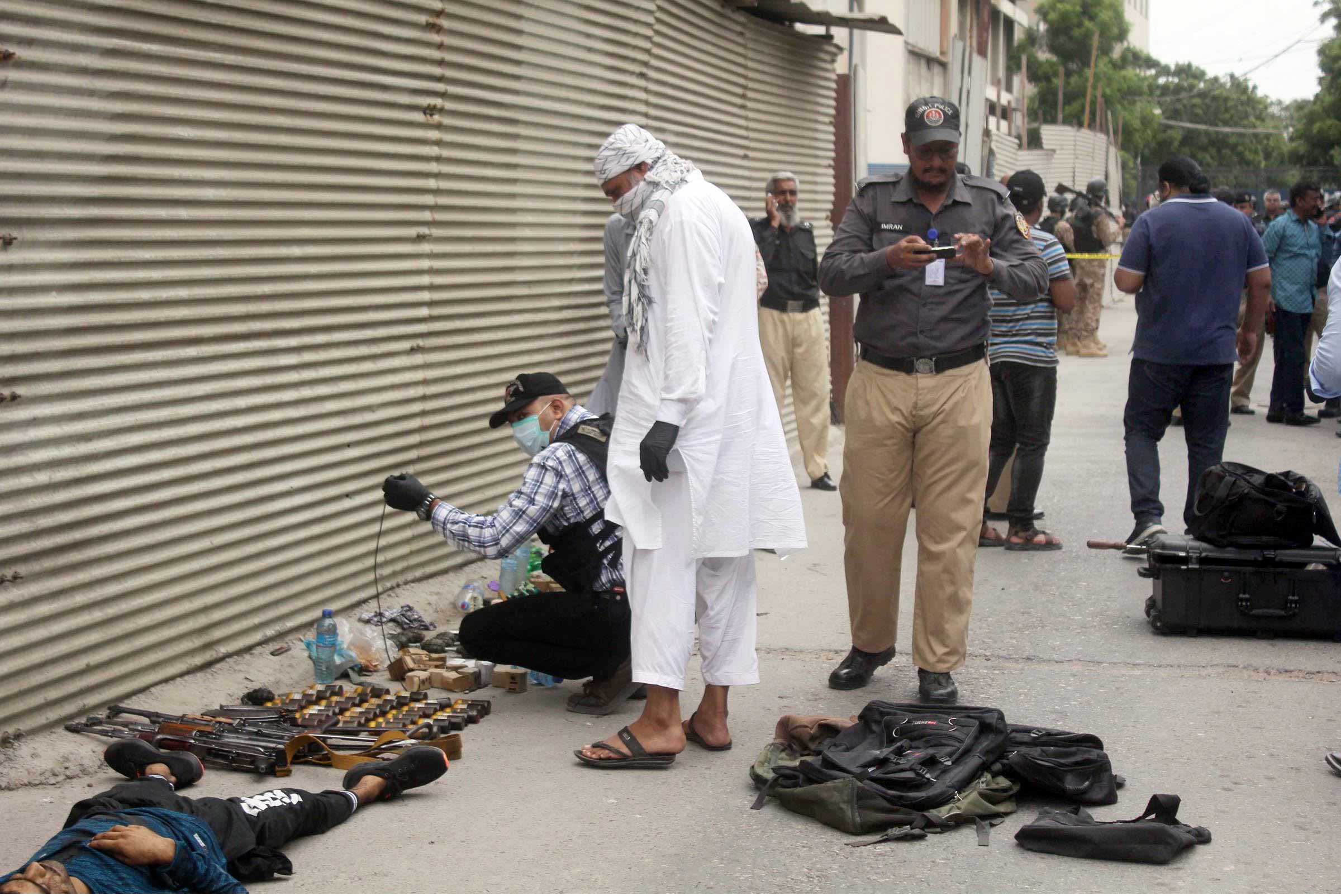 Rizwan Ahmed, a police official at the scene, said that while opening fire, the gunmen entered the stock exchange grounds. He said that after the attack was over, food supplies were found on the bodies of the gunmen, indicating they may have planned a long siege, which police quickly thwarted.

Inside the stock exchange, broker Yaqub Memon told that he and others were huddled inside their offices while the attack was underway. As the firing ended and the gunmen were killed, police gathered all the employees and brokers in a single room while security forces went floor by floor to ensure that no explosives had been left behind, he said.

Shazia Jehan, a police spokesman, said the bomb disposal team was also called to the stock exchange to clear the building of any explosive devises. 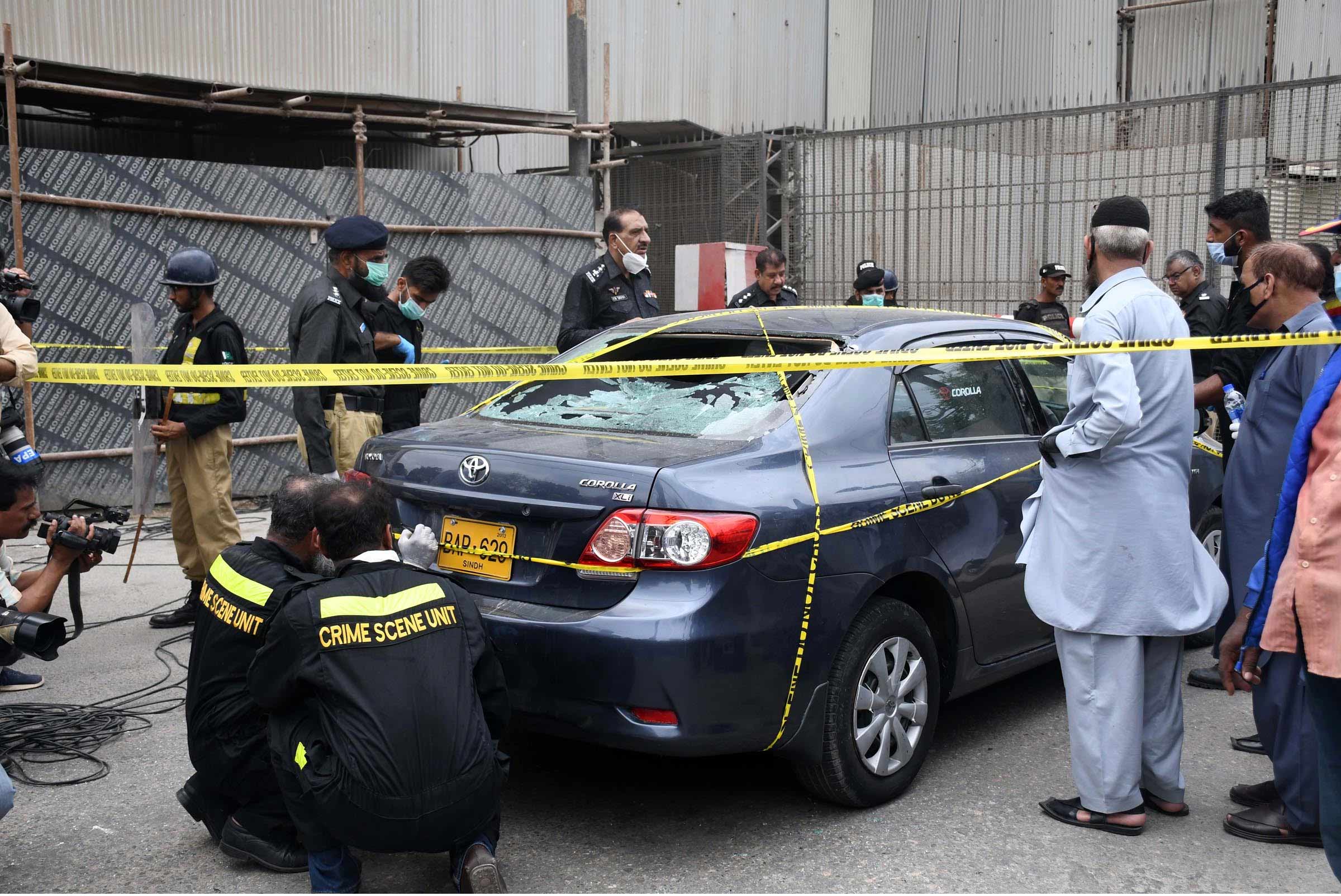 The investigation departments told that banned outfit commander Bashir Zeb planned the attack. The mastermind is currently present in Afghanistan with his other accomplices.

President Dr. Arif Alvi has deplored the terrorist attack on the building of PSX and said that Pakistan is determined to root out terrorism from its soil and terrorists will never succeed in their nefarious designs.

He also appreciated the security personnel, who foiled the attack by putting their own lives in danger.

While condemning the incident, Prime Minister (PM) Imran Khan paid a tribute to the security officials who foiled the terror bid and prayed for quick recovery of the wounded. The entire nation is proud of its brave officers, Imran Khan added.

Sindh Chief Minister (CM) Syed Murad Ali Shah praised the swift action taken by police and Rangers while directing them to stay alert. It was an attack on the country’s sovereignty and economy, he said.

The CM further added that anti-state elements want to take benefit during the COVID-19 situation by harming Pakistan. He summoned detailed inquiry report of the occurrence.

Sindh Governor Imran Ismail has also denounced the mishap and tweeted, “Strongly condemn the attack on PSX aimed at tarnishing our relentless war on terror. Have instructed the IG & security agencies to ensure that the perpetrators are caught alive & their handlers are accorded exemplary punishments. We shall protect Sindh at all costs.”

Strongly condemn the attack on PSX aimed at tarnishing our relentless war on terror. Have instructed the IG & security agencies to ensure that the perpetrators are caught alive & their handlers are accorded exemplary punishments. We shall protect Sindh at all costs.

The Karachi stock exchange is Pakistan’s largest and oldest stock exchange, incorporated today with the exchanges in Islamabad and Lahore. 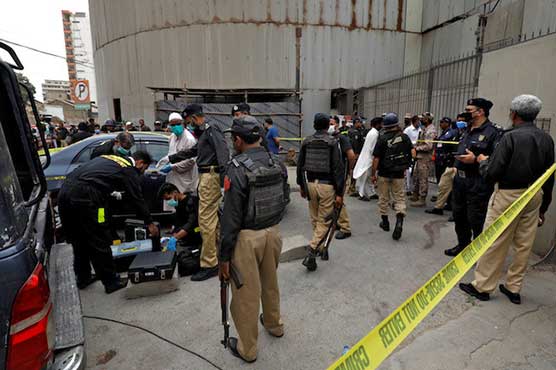 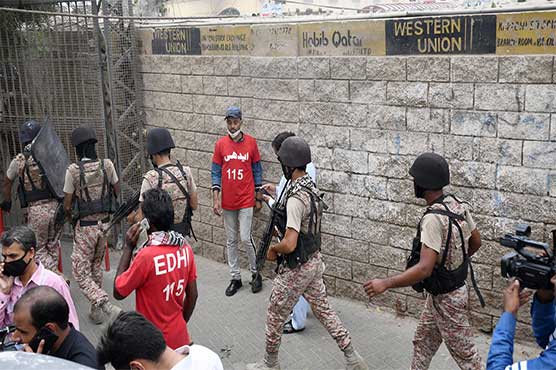 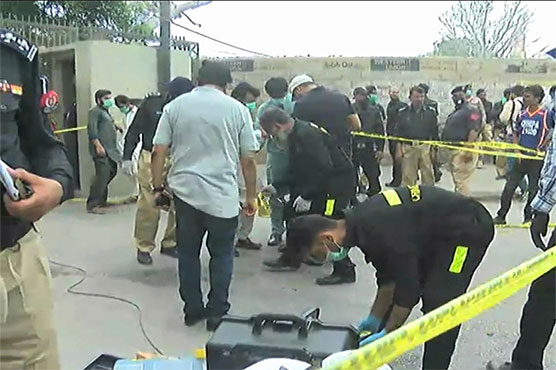 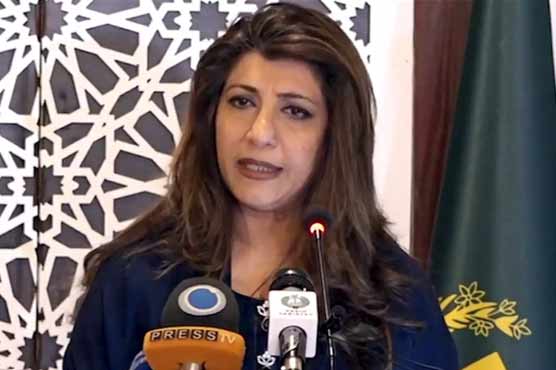