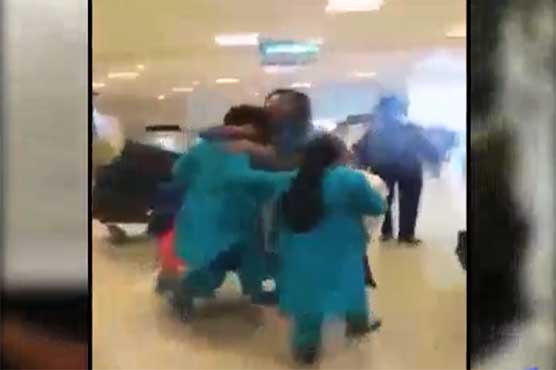 FIA officials conducted a raid at the airport and stopped the victims from travelling abroad.

ISLAMABAD (Dunya News) – Woman and daughter, who were brutally tortured by Federal Investigation Agency (FIA) officials at Islamabad airport, were stopped from flying to Norway at Peshawar’s Bacha Khan airport.

FIA officials conducted a raid at the airport and offloaded the victims, belonging to Nowshera, from Norway-bound flight.

It is pertinent to mention here that Chief Justice took suo moto notice of the mishap two days ago whereas two cases, one against the immigration officials and the other one against the mother and the daughter, were also lodged.

On April 19, the officials at Benazir Bhutto International Airport had a minor dispute with passengers Haseena Begum and Fauzia Umar who were traveling through a Pakistan International Airlines (PIA) plane.

Both women were taken to a room where FIA officials allegedly thrashed them due to which women received injuries and were taken to a hospital as their condition became critical.

On the other hand, airport management had claimed that the female passengers abused their staff after which the situation became worse.