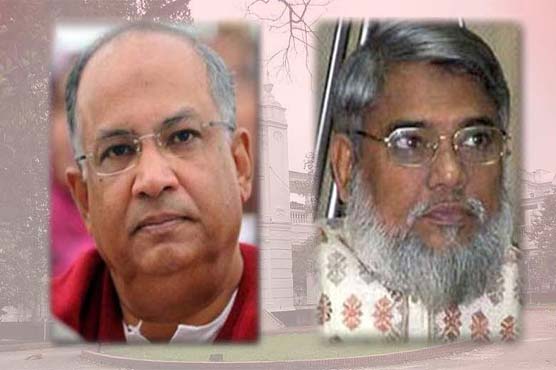 Both have exhausted all legal appeals to avoid execution and their fate now rests with President.

DHAKA (AFP) - Two top Bangladesh opposition leaders who are expected to be hanged within days sought clemency from the president Saturday in a last-ditch attempt to escape the gallows, the country s justice minister said.

"It won t be treated as a mercy petition by an ordinary condemned prisoner, which means it will be treated on an urgent basis," the minister said.

The two leaders have exhausted all legal appeals to avoid execution and their fate now rests with President Abdul Hamid, who has the power to pardon or commute the death sentences of any convict.

Mujahid, 67, is the second most senior member of Bangladesh s largest party, Jamaat-e-Islami, while Chowdhury, 66, is an ex-lawmaker and a top aide to Khaleda Zia, leader of the main opposition Bangladesh Nationalist Party.

The president will seek advice from Prime Minister Sheikh Hasina before making a decision, Huq said, adding the Supreme Court s decision to uphold the sentences "reflected the desire of the country".

They are among more than a dozen leaders of the opposition alliance convicted by the tribunal, which was set up by the secular government in 2010.

The convictions triggered the country s deadliest violence since independence, with some 500 people killed, mainly in clashes between Jamaat activists and police.

There are fears the latest verdicts could spark fresh unrest in the Muslim-majority nation, which is reeling from a string of killings of secular bloggers as well as the murders of two foreigners in recent months.

Immediately after Wednesday s verdict, authorities shut down Facebook and messaging and voice call services Viber and WhatsApp in an attempt to stop Jamaat supporters from mobilising to protest against the rulings.