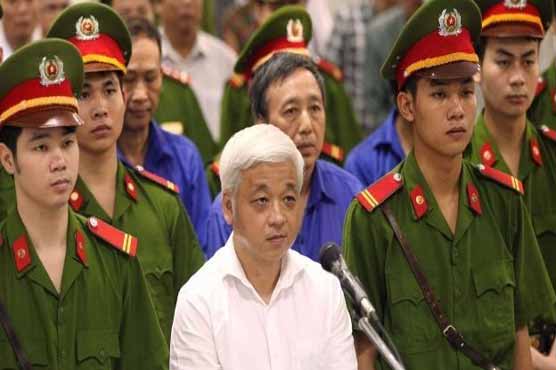 HANOI (AFP) - A Vietnamese court on Monday sentenced a disgraced banking tycoon to 30 years in jail over a multi-million dollar scandal that shocked the nation s already fragile financial markets.

"The accused was not honest and so must be given serious punishment in line with his crime," court president Nguyen Huu Chinh said at the end of the two-week trial Monday.

Kien, who denied the charges against him, was given 30 years in jail and handed a 75 billion dong ($3.5 million) fine.

The flamboyant multi-millionaire went on trial alongside seven other defendants, all top bankers at Asia Commercial Bank (ACB), which counts global banking giant Standard Chartered as one of its "strategic partners".

According to the verdict, Kien -- a shareholder in some of Vietnam s largest financial institutions and a founder of ACB -- and his accomplices caused losses of $67 million through illegal cross-bank deposits and investments.

Most of the cash vanished when Kien ordered his staff to make deposits at the Vietnam Joint Stock Commercial Bank for Industry and Trade (Vietinbank).

An employee from that bank has already been sentenced to life imprisonment for fraud.

The banker rose to public prominence as a vocal critic of corruption in Vietnamese football, using his role as chairman of Hanoi Football Club to sound off against Vietnam s Football Federation.

When Kien was arrested in August 2012 it sent "shockwaves across the country", state media reported at the time, and caused ACB s share price to plunge.

Experts interpreted the arrest of the high-profile banker as part of bitter infighting within the ruling Communist Party.

Kien had been seen as an ally of Prime Minister Nguyen Tan Dung and has become the subject of intense speculation on blogs over his business dealings with Dung s daughter.