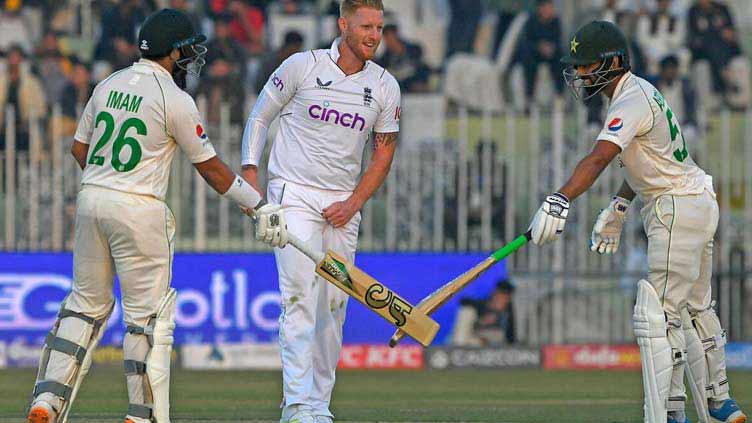 RAWALPINDI – England on Sunday declared their second innings 264 on Day 4, setting a target of 343 runs for Pakistan to win the opening game of the three-match Test series in Rawalpindi.

The visiting team started the second innings after dismissing the Team Green at 579, taking a lead of 78 runs. Joe Root and Harry Brook powered England to make 264 runs in 35.5 over before the tea break.

Earlier in the day, Pakistan resumed its innings at 499-7 with Salman Ali Agha and Zahid Mahmood on the crease. However, the tail order could not stand firm against Will Jack’s bowling spell. He removed Agha (53), Mahmood (17) and Haris Rauf (13) to restrict Pakistan to 579.

On Saturday, Pakistan were lifted by centuries from skipper Babar Azam (136) and openers Imam-ul-Haq (121) and Abdullah Shafique (114). But England took three wickets in the first session, none in the second and four before the close to put themselves in a better position.

Spinners Will Jacks (three for 132) and Jack Leach (two for 160) shared the early spoils, while the pace duo of James Anderson and Ollie Robinson took a wicket each.

Saturday s final session belonged to home skipper Babar Azam, who hit 19 boundaries and a six for his first Test century against England.

He cracked a boundary towards cover off opposition skipper Ben Stokes to reach his eighth career Test century, this coming off 126 balls and studded with 13 boundaries.

Jacks forced a miscued drive off Babar to get him caught at point, and in the next over Mohammad Rizwan played straight into the hands of mid-wicket off Anderson.

Debutant Saud Shakeel, who added 123 for the fourth wicket with Babar, was caught behind off Robinson soon after the tea interval.
Both teams now have three Test centuries and successive hundreds at the venue, having also reached three figures against Australia in March this year.