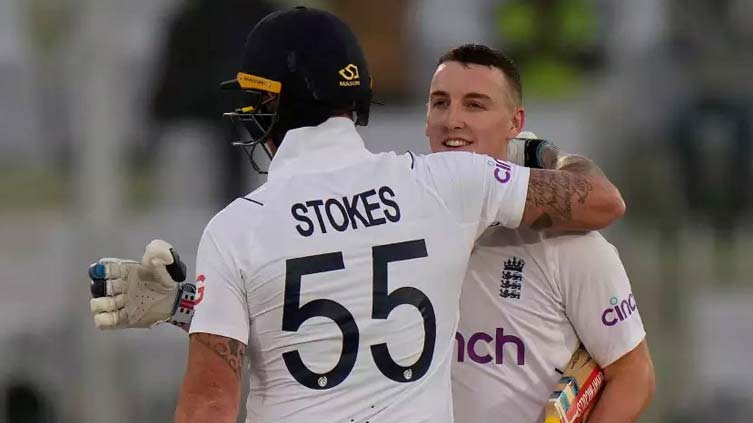 RAWALPINDI (Dunya News) - On the second day of first cricket test of three match series against Pakistan, England resumed their first inning at 506 runs for the loss of 4 wickets in Rawalpindi on Friday.

On Thursday, England broke 112-year record for most runs against Pakistan in a day during the first Test match at Pindi Cricket Stadium on Thursday.

The English batters left no stone unturned to down Pakistan’s bowlers on the first day of the test match that was earlier assumed to be delayed amid players’ illness. Zak Crawley looked belligerent for his 111-ball 122, supported well by Ben Duckett, who made 110-ball 107 – playing a Test match after a six-year hiatus.

Wicketkeeper Ollie Pope arrived on the pitch, with the intention to play aggressive cricket – following in the footsteps of openers Zak Crawley and Ben Duckett – and went on to score brilliant 108 off 104. Joe Root was the only batter who departed for 23.

But the debutant Harry Brook, who is making a strong statement in the formats of the limited overs, took the benefit of England’s position and played natural cricket as he remained unbeaten on 100.

Four of England s top five batsmen smashed rapid hundreds against Pakistan in a record-breaking batting performance as the visitors racked up 506-4 on the opening day of the first test in Rawalpindi.

It is the first time in test cricket that 500 runs have been scored on the first day, with England in dazzling form on their first test tour of Pakistan since 2005.

On a flat track and against a Pakistan attack that included three debutants, England s batting looked like a continuation of their victorious campaign at the T20 World Cup in Australia.

Number three batsman Ollie Pope made 108 while Harry Brook, who was unbeaten on 101 off 81 balls, illustrated their approach best when he smashed six fours in an over from Saud Shakeel.

Captain Ben Stokes was batting on 34 when bad light stopped play, doubtless to the relief of the Pakistan camp.