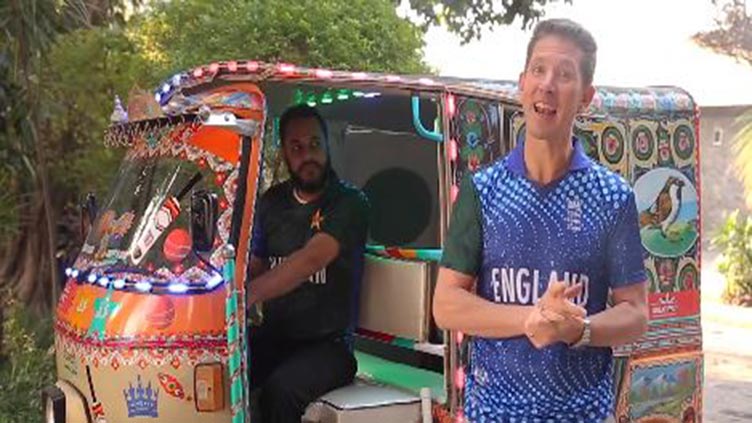 England Test team is in Pakistan after 17 years for a three-match series, which is part of the ICC World Test Championship. The first Test commenced at Rawalpindi on Thursday. The Rawalpindi Test will be followed by fixtures in Multan (December 9-13) and Karachi (December 17-21).

The top British envoy shared a video on his official Twitter handle wherein he can be seen boarding on the rickshaw while holding a cricket bat and wearing a jersey, containing the names of both Pakistan and England.

Before getting in the rickshaw, he tells the driver in Pothohari (the local language of Rawalpindi and adjoining areas), “Raja Ji, Pindi Julsanh tae match taksanah!” (Raja Ji, let’s go to Rawalpindi and watch the match).

He also spoke in Urdu saying that the epic contests between Pakistan-England had taken the game of cricket to new heights. “We had an incredible T20 series between the two countries. That was followed by an awe-inspiring T20 World Cup final. On both occasions, England cricketers stole the show.

“Now all eyes are on Tests. Which team is the best? [Keep watching] From December 1 to 21. Victory will belong to the team that show most passion on the ground.
“Boys, give it your all because when passion is running in your veins, you never give up,” he asked the players.