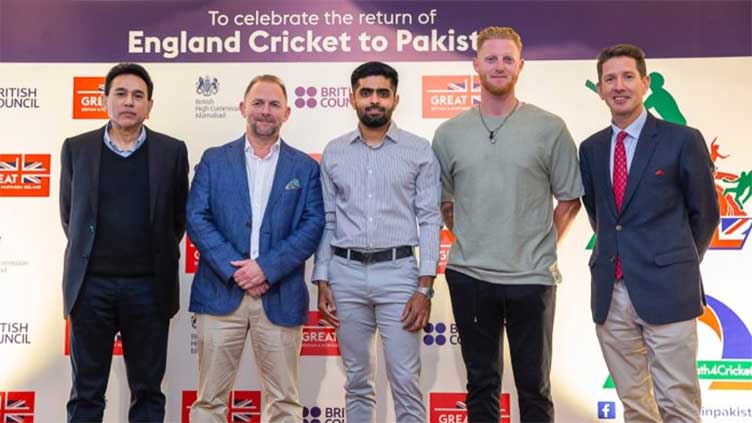 ISLAMABAD, (APP) - The British High Commission in Pakistan has hosted a reception to welcome the return of the England test cricket to Pakistan.
In attendance were notable sports and media personalities, political figures, representatives from the ECB and PCB as well as cricket players who are set to play test cricket in Pakistan for the first time in 17 years.

On the occasion British High Commissioner in Pakistan, Dr Christian Turner said ‘Cricket teaches us to play hard, accept defeat and respect our opponents. The players, PCB and ECB are great ambassadors for their sport and it is a pleasure to welcome them to the High Commission. The generous donations to flood victims is a sign of the deep ties and affection between our two countries.’

England batter, Ollie Pope, said, ‘We’re delighted to return to Pakistan for this historic Test tour after such an exciting T20 series earlier this year. We’re grateful for the warm welcome we have received but also know that many communities have been impacted severely by the floods.
It’s great to see so many different organisations coming together to arrange this donation of cricket equipment and hopefully, it will go a small way to ensuring that children in some of the affected areas can still benefit from all the good that cricket can do as they try to recover.’

The return of the England Test team comes amid a standout year for UK-Pakistan sporting and cultural ties, coinciding with the 75-year anniversary of UK-Pakistan relations, the Birmingham Commonwealth Games, the England T20 Pakistan cricket tour and the World Cup T20 England-Pakistan final. The Tests mark a high point, as 2022 draws to a close.

The return of England cricket has coincided with a strong focus on the power of sports diplomacy – with both tours taking place following the devastation caused by floods. Both the ECB and cricketers contributed to the UK’s DEC Pakistan flood appeal during the T20s which raised over £30m to provide lifesaving aid to those affected.

England Test Captain, Ben Stokes, has also generously announced that he will be donating his match fees for this Test series to the DEC appeal. In addition, the ECB in collaboration with the Lord’s Taverners, BA, IAG Cargo, Football for Peace and the Sarwar Foundation are shipping in 1 tonne of cricket kit to enable schools affected by flooding to rebuild their sports curriculums and help children return to a sense of normality.

This sports diplomacy drive compliments a wider UK Government focus on supporting Pakistan’s resilience in the aftermath of the floods via education development.

Through its programmes, the UK is currently supporting 40,000 marginalised children with back-to-school kits including essential textbooks, providing 8,000 dignity kits for adolescent girls, and delivering an accelerated learning programme to 30,000 children to help them catch up on lost learning due to flood disruption.

These efforts will safeguard girls in particular, and in the coming months the UK is set to expand its educational drive even further with a ‘Girls and Out of school children: Action for Learning (GOAL)’ programme which will support 20,000 flood-affected students (at least 60% female) to return to education in 235 schools.