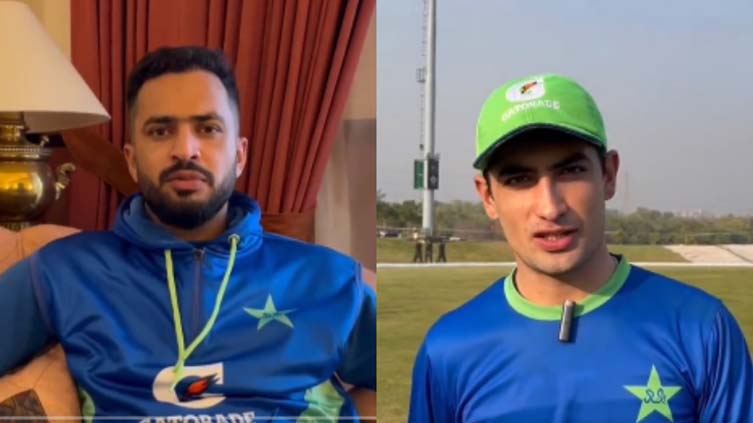 LAHORE (Web Desk) - Pakistan cricketers Mohammad Nawaz and Naseem Shah have shared special message for the "Pindi Boys" ahead of the Pakistan vs England Test series in the garrison city of Rawalpindi.

Pakistan Cricket Board (PCB) shared a video of the cricketers on its social media platforms.

Mohammad Nawaz said, "I have a request to all the Pindi boys that they come to stadium and support their team and enjoy the cricket in [Pakistan]."

While the young pacer Shah added that he has the same message for the fans, saying, "They always come to support us and I request them to come and support as a big team is coming to play after a very long time."

He also hoped that "good cricket" will be played between both teams.

On Sunday, England cricket team arrived in Islamabad first time in 17 years to play a three-match Test series against Pakistan.

PCB officials welcomed the England player at the Islamabad International Airport as they stepped on the soil of the South Asian country after a long period.

Mystery spinner Abrar Ahmed and fast bowler Mohammad Ali have been rewarded for their strong first-class performances with maiden Test call-ups on the back of their thrilling performance in Quaid-e-Azam Trophy editions.

Pacer Haris Rauf will also be representing the national side for the home series.