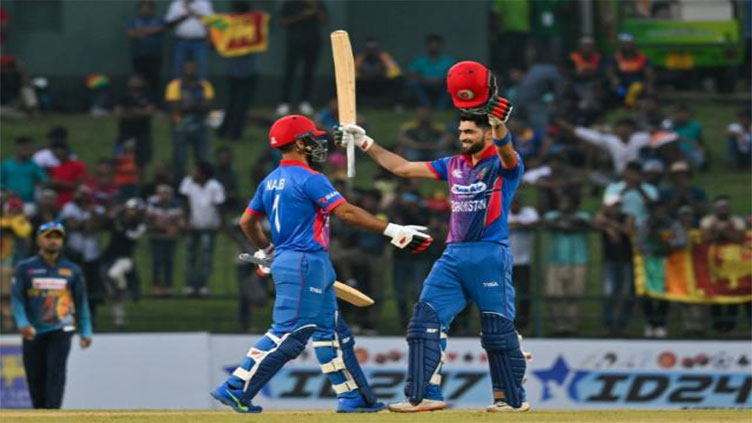 Afghanistan registered an emphatic 60-run win over Sri Lanka in the opening ODI on Friday.

Afghanistan posted 294-8 after electing to bat as Ibrahim, who hit 106, put on key partnerships, including a 118-run second-wicket stand with Rahmat Shah, who made 52, in Pallekele.

Afghanistan s Farooqi and fellow quick Gulbadin Naib shared seven wickets between them as the tourists bowled out Sri Lanka for 234.

Pathum Nissanka s 85 and a threatening 66 by Wanindu Hasaranga went in vain as Afghanistan ended the Sri Lankan innings in 38 overs.

But it was the batting that set the tone for Afghanistan s domination in the first ever bilateral ODI series between the two teams.

Ibrahim led the charge with his second ODI century and Najibullah Zadran s 25-ball 42 boosted the total but some disciplined bowling in the end checked Afghanistan, who looked like getting over 300.

"The pitch was good for batting, I read the surface and took my time, and it worked," man of the match Ibrahim said.

"The track remained the same throughout, we wanted to get to 320, that was the plan. Our bowlers did a great job."

Rahmanullah Gurbaz justified captain Hashmatullah Shahidi s decision to bat first as he hit a flurry of boundaries in his 53.

Ibrahim joined the attack as the two put on 84 runs to set the tone for the batting charge.

Cameos from Najibullah and Naib, who made 22 off 24 balls, took on the bowlers in the end but Sri Lanka gave away just 31 runs in the final five overs and took five wickets.

Hasaranga returned impressive figures of 2-42 in his 10 overs.

The hosts started briskly but regular wickets hurt their progress with Naib picking two to rattle the top-order.

Nissanka reached his fifty in 42 balls and put on 47 runs with skipper Dasun Shanaka, who fell to Naib.

Farooqi denied Nissanka his ton but Hasaranga soon hit back to raise hopes of a turnaround.

He smashed Mohammad Nabi for a six and four fours in a 22-run 31st over and raised his fifty in 31 balls.

Wickets kept falling and Hasaranga was the last man out to Farooqi, who finished with figures of 4-49.

"The difference between the two sides was the partnerships. Their side batted around Ibrahim and had three partnerships," said Shanaka. "We had starts but couldn t convert it."

The loss dented Sri Lanka s chances of a direct qualification to the 50-over World Cup in India next year with crucial Super League points up for grabs in the series.

Shanaka said Sri Lanka need to "win three out of (remaining) five games (for World Cup qualification) and we re looking forward to that."

The second match is on Sunday at the same venue.