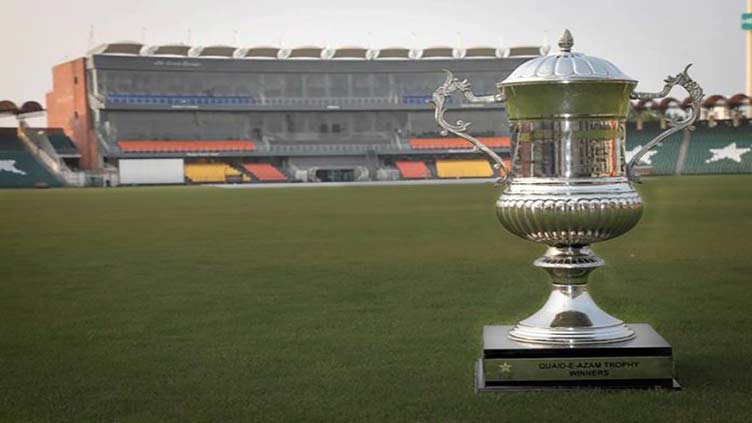 LAHORE (Dunya News) - The tenth and final round of the Quaid-e-Azam Trophy 2022-23 season begins at three venues across the country tomorrow (Sunday).

The Sindh-Balochistan match is of vital importance for Sindh who are harbouring hopes of playing their first final of the prestigious domestic trophy since the tournament was revamped as a six-team competition in the 2019-20 season. In the ninth round, Sindh drew their high scoring home tie against Northern at the National Bank Cricket Arena (National Stadium, Karachi).

Sindh at present have Central Punjab breathing down their neck, the two have a mere five point gap – Sindh are at 118 and Central Punjab have a 113 points tally at the conclusion of the ninth round. The Saud Shakeel-led Sindh cannot afford to slip-up in their last match. Both Sindh and Central Punjab would be playing their matches a mere 100-metre or less apart – LCCA Ground and Gaddafi Stadium to add another twist to the intriguing 10th round tale.

The Mohammad Saad-led Central Punjab played a rain-affected draw against Balochistan at the LCCA Ground in the previous round. They would have to make a big effort to push for a win against Southern Punjab to improve their chances of a final’s berth. The two sides had drawn the first match of the Punjab derby in October at the Multan Cricket Stadium.

Southern Punjab who are at the fifth spot would be hoping to salvage something out of what has been a disappointing season for them with a victory, they are yet to win a match in the season having drawn six games besides two defeats. Southern Punjab had their ninth round fixture against Khyber Pakhtunkhwa washed out in Abbottabad.

Northern have all but confirmed their place in the final following their draw against Sindh and only a big defeat and victories for Sindh and Central Punjab in the tenth round can halt their progress to the tournament decider.
Northern currently have a 132 points tally with three wins and six draws from the first nine rounds. Defending champions Khyber Pakhtunkhwa would be hoping to upset the table-toppers to finish on a high following their worst season to date in the revamped format. They languish at the bottom with a mere 53 points (three draws, four defeats, two abandoned matches).

Openers Abdullah Shafique – Central Punjab and Mohammad Huraira – Northern, are the only two batters to have reached the 800-run mark so far. Abdullah tops the list of tournament run-getters with 867 runs at 72.25 (three centuries and four fifties).

Huraira who scored 173 and 58 not out against Sindh in the ninth round has now tallied 800 runs at 72.73 (three centuries, two fifties). Southern Punjab’s seasoned performer Usman Salahuddin is at number three with 733 runs at 61.08 (three centuries, three fifties).

Sindh’s Abrar Ahmed continues to mystify batters with his leg-spin in the ongoing season. Abrar is on the top of the bowling list with 43 wickets in six matches – five five-fers – at an average of 21.95.

Northern’s off-spinner Mubasir Khan is number two on the list with 26 wickets in nine games at 30.15 – one five-fer.

Southern Punjab will take on Central Punjab at the UBL Sports Complex, Sindh will play Balochistan at the NBP Sports Complex and Northern will compete against Khyber Pakhtunkhwa at KCCA Stadium in the fixtures beginning tomorrow – the tenth and final round.

In the ninth round matches Northern and Southern Punjab defeated Sindh and Khyber Pakhtunkhwa respectively.

Central Punjab have accumulated 170 points and have already bagged the championship. Khyber Pakhtunkhwa are second placed with 124 points while Southern Punjab are at the third spot with 120 points.