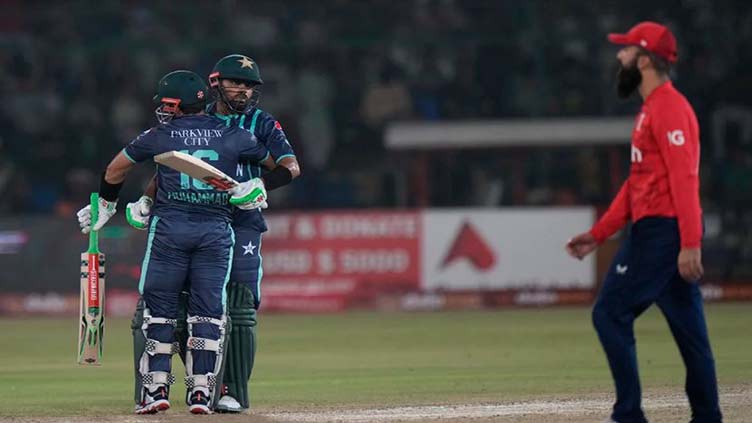 KARACHI (AFP) - Openers Babar Azam and Mohammad Rizwan put on an unbeaten 203-run partnership as Pakistan claimed a remarkable 10-wicket victory over England in the second T20 international in Karachi on Thursday.

Azam hammered 110 not out for his second T20I hundred while Rizwan scored an undefeated 88 as the pair completed a chase of 200 in 19.3 overs at a packed National Stadium.

With 1,929 runs together, the Azam-Rizwan partnership has become the most prolific in T20Is, beating Indian stars Shikhar Dhawan and Rohit Sharma s record of 1,743 in 51 matches.

Azam and Rizwan have achieved the record in just 36 games.

The win levelled the seven-match series at 1-1 after England won the first game by six wickets, also in Karachi on Tuesday.

Azam, who endured a miserable Asia Cup earlier this month with just 68 runs in six matches, smashed five sixes and 11 fours off 66 balls, while Rizwan struck four sixes and five boundaries in his 51-ball innings.

Azam s hundred came off 62 balls, adding to his 122 against South Africa at Centurion last year.

The pair reached 100 in just 11.2 overs -- their seventh century stand together in T20I cricket.

Rizwan, dropped on 23 by Alex Hales off Liam Dawson, completed his fifty off 30 balls while Azam took 39 deliveries for his half-century.

It was Pakistan s second 10-wicket win in the format following their first against India in last year s T20 World Cup.

The pair also improved on their 197-run opening stand they set against South Africa last year.

Earlier, England s stand-in skipper Moeen Ali struck a rapid half-century to lead his team to 199-5 after they won the toss and batted first.

Moeen smashed four sixes and as many fours in his 23-ball 55 not out.

Fast bowlers Haris Rauf (2-30) and Shahnawaz Dahani (2-37) were the pick of Pakistan bowlers.

England are on their first tour of Pakistan in 17 years.

The next matches are in Karachi on Friday and Sunday.