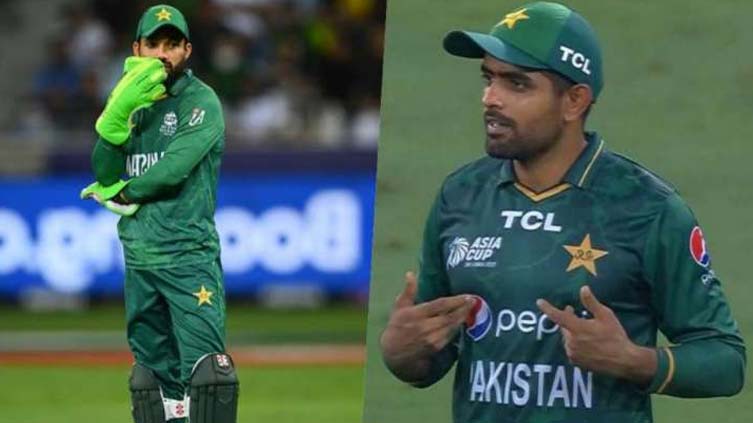 Babar has moved down to the third spot as South Africa's Aiden Markram moves ahead of him.

LAHORE (Web Desk) - Pakistan wicket-keeper batter Mohammad Rizwan has managed to persist his top position in the latest ICC T20I rankings while Pakistan skipper Babar Azam, who is unable to perform recently has slipped down a little further after a dismal display in the recently concluded 2022 Asia Cup.

Babar has moved down to the third spot as South Africa’s Aiden Markram moves ahead of him in the latest rankings. Babar has lost 23 points after his failures throughout the Asia Cup. Babar only scored 68 runs at an average of 11.33 in 6 innings he played in the competition.

Meanwhile, Pakistan’s ace wicket-keeper batter, Mohammad Rizwan has maintained his top spot losing five rating points in the latest rankings. Rizwan finished as the leading run-scorer in the competition with 281 runs at an average of 56.20 and a strike rate of 117.57.

On the other hand, Indian star cricketer Virat Kohli and Sri Lanka all-rounder Wanindu Hasaranga have been rewarded for their dominant performances at the Asia Cup by making giant strides on the latest Player Rankings, while a new No.1 all-rounder has been crowned in the shortest format of the game.

Kohli scored his first international century in almost three years and scored an impressive 276 runs at the Asia Cup. He improved a total of 14 spots to 15th overall on the T20I batter rankings due to his efforts.

The Sri Lanka all-rounder picked up nine wickets for the tournament - including three in the final against Pakistan - and his form was a major reason why the island nation was able to claim a sixth Asia Cup title.

And Hasaranga could be eyeing off top spot in both ranking lists should he be able to replicate his current form during the upcoming T20 World Cup in Australia later this year.

The 25-year-old is now just 100 rating points behind Australia s Josh Hazlewood on the list for T20I bowlers, while the gap at the top is even less on the all-rounder rankings.