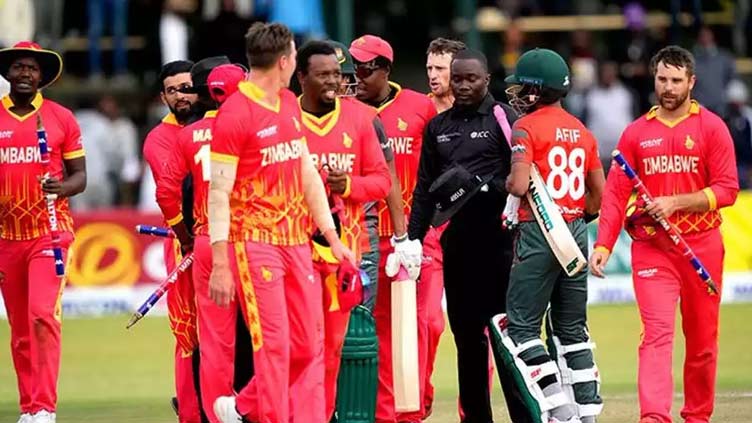 HARARE (AFP) - A 79-run seventh-wicket partnership between Ryan Burl and Luke Jongwe proved crucial as Zimbabwe beat Bangladesh by 10 runs on Tuesday to win a Twenty20 international series between the countries for the first time.

After slumping to 67-6 off 13 overs in the third and final match, Burl and Jongwe smashed eight sixes and six fours between them off 31 balls to offer hope to the hosts.

Both Jongwe (54) and Burl (35) were dismissed during the penultimate over as they looked to hammer medium-pacer Hasan Mahmud over the ropes.

Zimbabwe finished their 20 overs on 156-8 and, in a tense finish at Harare Sports Club, restricted Bangladesh to 146-8 for a 2-1 series triumph.

A 17-run victory for Zimbabwe last Saturday was followed one day later by a seven-wicket win for the tourists.

The Zimbabwe total was achieved despite losing their regular top scorer, Pakistan-born Sikandar Raza, for a golden duck.

Mahmud and Mehidy Hasan were the pick of the Bangladesh bowlers, both finishing with identical figures of 2-28 off four overs.

"I am delighted with the guys. We talked a couple of times on the positive brand of cricket we want to play. We never give in on that," said recently hired Zimbabwe coach Dave Houghton.

"Today, we were in a tricky position and a couple of players down the order got us a match-winning score. So I am happy with the cricket we are playing, I hope it continues for a long time."

Stand-in Bangladesh captain Mosaddek Hossain said: "Ryan Burl made the difference. Batting wise, we lost wickets too early. From the beginning, our bowling was very good.

"Everyone knows how good we are in one-day internationals and we are very confident going into the three match series from Friday."

Always slightly behind the required run rate, Bangladesh reached 131-6 off 18 overs, leaving them requiring 26 runs to snatch victory in the match and the series.

Victor Nyauchi, one of three changes to the Zimbabwe team convincingly beaten on Sunday, restricted Bangladesh to seven runs in the penultimate over.

Needing 19 off the final over, Jongwe held his nerve with the ball to secure the win for Zimbabwe. Afif Hossain finished as Bangladesh s leading scorer with an unbeaten 39 off 27 deliveries.

Nyauchi took three wickets and Brad Evans, another change after the second T20 loss, claimed two for Zimbabwe, who have won seven of eight matches in the shortest format since the beginning of July.

The change in fortunes after 3-0 T20 and one-day international whitewashes at home to Afghanistan coincided with the appointment of former star Houghton. Bangladesh were without captain and wicketkeeper Nurul Hasan due to a finger injury, which has also ruled him out of the three-match ODI series.