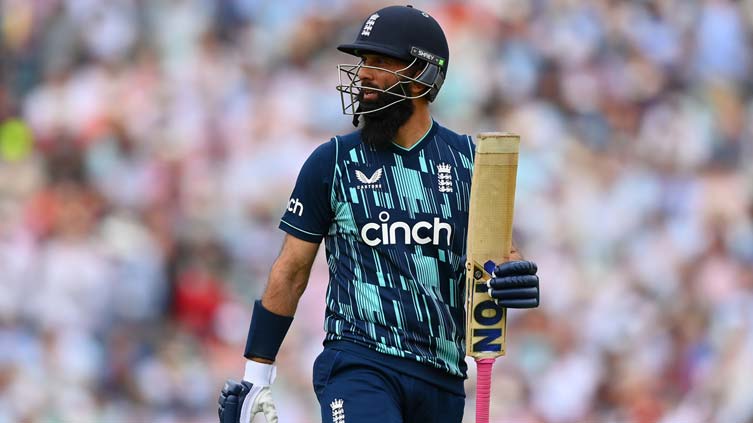 "There is no need to panic or change," Moeen said.

LONDON (Web Desk) - England’s all-round cricketer Moeen Ali reckons that there s "no need to panic or change anything" in the aftermath of England s 10-wicket defeat against India in the ODI series opener.

In their first ODI under Jos Buttler as full-time captain, the hosts were rolled over for 110 in only 25.2 overs, admittedly in conditions ripe for swing and seam.

"Jos is a brilliant leader. He has done it over the years when Eoin hasn t played but it is going to take a couple of games in all the formats," Moeen said in an interview with Crizbuzz ahead of the second ODI at Lord s. "As a new captain no matter how cool you are, you want to get off to a winning start but he knows there is a long way to go and the team will be fine.

"There is no need to panic or change. It definitely takes time to bed in and it will take a few defeats, which is fine. We have been dominating for the last few years in a nice way and playing well. We ve had a lot of success but sometimes I feel we don t want to peak too early."

Moeen reckoned that England would like to ideally peak before World Cups, the immediate one being the T20 World Cup in Australia. Even though both the teams are right now in the middle of a 50-over series, momentum is what matters according to the left-hand all-rounder.

"We ve lost a few games, which is good for us, I think, moving forward. Then hopefully closer to the World Cup, we start winning. It doesn t mean we don t want to win now. But you don t want to win all the games in my opinion. It s a good thing that sometimes you learn more from losing.

"We ve been dominating for the last few years. We ve had a lot of success. We won a World Cup. You don t want to peak too early. We know there are players that need to come back in who can strengthen us."

In the first ODI, England threatened collapsing to their lowest ever ODI total (86) before the last two wickets added 42 runs. Buttler s 30 off 32 was the highest individual score in the innings as Jasprit Bumrah ran rampant with his figures of 6 for 19. Clearly behind the eight ball and with all the rub of the green on the other side, England failed to strike as Indian openers took only 18.4 overs to chase.

"We need to step up as senior players in the team. When it is your turn to do that, you will do it," Moeen said.

"Jos does speak to the bowlers beforehand, but he will tell me sometimes to go up to the bowler. It works nicely. When Morgs didn t play he was always like that. It is not a problem having a keeper as captain.

"The dressing room almost runs itself a lot of the time. So the boys know that [batting collapses] can happen the way we play. It s just one of those days where we draw a line.

"It s a day off, play, day off, and all the traveling between that s difficult. That can be difficult and would be difficult for most teams."