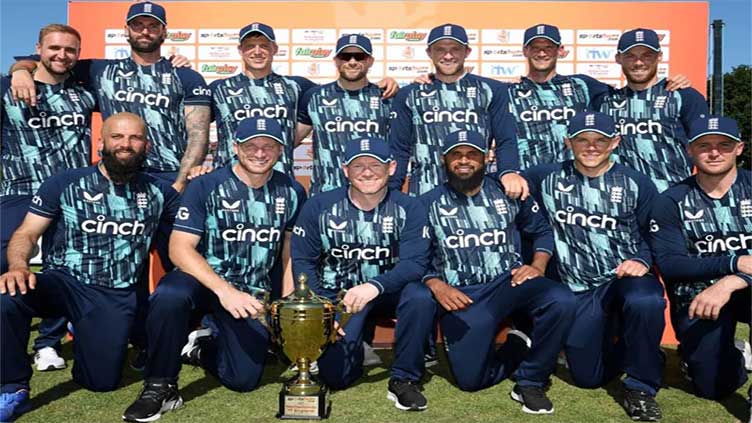 England beat Netherlands by eight wickets in the third one-day international on Wednesday.

AMSTELVEEN (AFP) - Jason Roy and Jos Buttler demolished the Netherlands on Wednesday as England coasted to an eight-wicket victory with nearly 20 overs to spare in the third one-day international, sealing the series 3-0.

Roy s 101 not out was his 10th one-day international hundred in Amstelveen, with Buttler, standing in for injured captain Eoin Morgan, smashing an unbeaten 86.

Earlier, the Netherlands collapsed from 203-3 in the 40th over to 244 all out, a total that never looked remotely enough against power-packed England.

The 50-over world champions again underlined the gulf in quality between the two sides after piling up a world-record total of 498-4 in the first ODI before cantering to victory in the second game by six wickets.

Roy and Phil Salt (49) scored briskly at the start of England s reply before Salt and Dawid Malan were both dismissed by Paul van Meekeren with the score on 85.

But Roy reached his hundred off 86 balls, with Buttler, who hit 162 not out in the first match of the series, hammering five sixes in his dynamic display.

Earlier, David Willey was the pick of the bowlers with 4-36, while Brydon Carse took 2-49.

Max O Dowd, Bas de Leede and skipper Scott Edwards hit half-centuries for the Netherlands but wickets tumbled at regular intervals in the final 10 overs as the hosts failed to build on their solid start.

"Another great victory," said Buttler, who was named man of the series.

"I thought we played really well with the ball to restrict them, picked up wickets at crucial times and a brilliant batting display again.

"I m feeling good. Don t get too giddy, just keep on going and enjoying it when I m playing well.

"There s a lot of cricket coming up in a short space of time, which is very exciting.

"We ve got great depth in the squad with more guys standing up on this trip and pushing up the competition in the squad, which is just what we want to see."