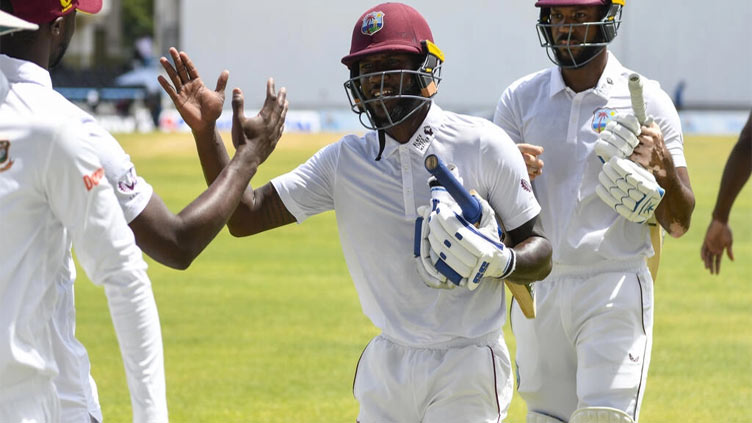 (AFP) - North Sound (Antigua and Barbuda) (AFP) – Opening batsman John Campbell completed his first Test half-century in the Caribbean as the West Indies completed a seven-wicket victory over Bangladesh on the fourth morning of the first Test in Antigua on Sunday.

Resuming at 49 for three, and needing just 35 more runs at the start of the day in pursuit of a modest target of 84, Campbell dominated the scoring alongside vice-captain Jermaine Blackwood (26 not out).

He completed his third Test half-century overall with a sweep for four before sealing the result emphatically with a six over long-off in the same over from part-time off spinner Najmul Hossain.

Any slim Bangladesh hopes of creating further alarms in the West Indies camp never materialised as seamer Khaled Ahmed, who grabbed three early wickets late on the third day to reduce the home side to nine for three, proved as ineffective as the other bowlers used by captain Shakib Al Hasan.

Having batted carefully the previous evening to steady the innings, Campbell and Blackwood batted with complete freedom in knocking off the remaining runs off seven overs in less than half-an-hour in an unbroken 79-run stand.

For Shakib, returning to the Test side as captain, the early batting capitulation at the start of the Test match was the defining factor in the final result.

"That one session killed the game for us," was his frank assessment at the end of the match in looking back on the first morning of the match on Thursday when Bangladesh lost six wickets before lunch on the way to being routed for 103.

"We were always behind the game from that point. It is not at all acceptable. We ve been doing this quite regularly now in our last four-five Test matches.

"Our batsman need to find ways to survive, to stay at the wicket and get runs. Then the bowlers will have a chance of winning the match for us."

Shakib s West Indian counterpart was the happier man at the end of the match although Kraigg Brathwaite would have preferred a better overall batting effort from his team in the first innings.

"I thought Bangladesh bowled quite well, so for us to bat over 100 overs was a good effort, although I would have liked a few more runs in the first innings," said the home captain in reflecting on a West Indies first innings total of 265 in which he and vice-captain Blackwood combined for 157 runs.

Not surprisingly, he was full of praise for the role of man of the match Kemar Roach in spearheading the bowling effort.

"He continues to lead from the front, both on and off the field," said Brathwaite.

"I was particularly pleased with the way we took advantage of the conditions on the first morning. It wasn t just a matter of turning and bowling and expecting wickets to fall.

"We bowled properly, right lengths and lines and got the reward to set the tone for the rest of the match."

Roach finished with seven wickets in the match, including his tenth Test innings five-wicket haul in the second innings.

He has 50 Test victims at the Sir Vivian Richards Stadium and drew level with Michael Holding on 249 wickets to be joint-sixth overall among leading West Indies wicket-takers.

"I m a very big person on stats, so to be up there with the legends of the game is very satisfying, but I am just going to keep on working and hopefully get up to that 300-wicket mark," said Roach, who turns 34 on June 30.

Before that, he has the chance to claim sixth spot on the Caribbean wicket-takers  list on his own when the second and final Test begins on Friday at the Daren Sammy Stadium in St Lucia.