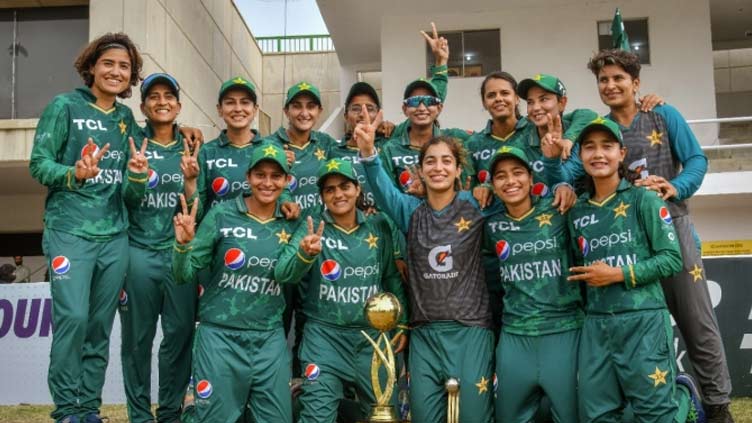 KARACHI (Dunya News) – Pakistan women produced one of their best fielding displays to defeat Sri Lanka women by four wickets in a last-ball thriller to win the third and final Twenty20 International in front of PCB cameras at the Southend Club on Saturday. The victory gave Pakistan a 3-0 series result.

Electing to bat first, Sri Lanka were in a position of strength at 69-0 in 11 overs before they made the miscalculation of testing Pakistan fielders’ mobility, agility and athleticism inside the 30-yard circle. This ploy badly backfired as they slipped to 83-7 in 16.4 overs, including four run-outs and a smart catch in the deep by Iram Javed of Sri Lanka’s top-scorer Chamari Athapaththu (37).

The visitors eventually limped to 107 for eight in 20 overs that included five run-outs. This was the 14th time in a women’s T20I that five batters were run-out in an innings and second time involving Sri Lanka. The record for most run-outs in an innings – six – is held by Singapore against Myanmar as they scored 86 for nine in April 2019.

The home side was stretched to the limits before they achieved victory for the loss of six wickets on the last ball of their allocation of overs after needing 15 runs off the last 12 balls, eight off the final over and two off the final delivery.

Pakistan captain Bismah Maroof, batting at numer seven, brought all her experience into play when she returned not out on 15 priceless runs off 15 balls. She added 17 runs for the unfinished seventh wicket with Kainat Imtiaz who contributed four off seven balls.

Athapaththu and Hasini Perera (27) provided their side a solid and confident start when they struck five fours and two sixes between them to carry their side to 69 for no loss in 11 overs. The two batters nudged and pushed the ball for ones and twos as Pakistan bowlers, while succeeded in protecting the boundaries, were unable to take wickets.

But as boundaries became hard to come by and overs running out, the Sri Lanka batters decided to test the fielders and that resulted in a sensational collapse as the tourists lost seven wickets for 14 runs in a space of 34 balls.

Perera started the procession when she failed to beat Bismah Maroof and was run-out halfway, next ball Athapaththu holed out to Iram that was followed by three more run-outs of Oshadi Ranasinghe, Harshitha Madavi and Ama Kanchana, while Nilakshi de Silva was trapped in front of the wickets by Tuba Hassan and Kavisha Dilhari was castled by Kainat Imtiaz as 69-0 soon became 83-7.

However, a 24-run eighth wicket partnership between Anushka Sanjeewani (14 not out) and Sugandika Kumari (10) helped Sri Lanka to 107 for eight. Kumari was the last batter who was run-out, raising the total of run-outs in an innings to five.

In their target chase, Pakistan had a few nervous moments as they lost wickets at regular intervals, but they were not really under any pressure as they ensured they maintained the required run-rate.

Muneeba Ali scored a 33-ball 25, Aliya Riaz hit a 23-ball 17, Nida Dar contributed run-a-ball 14 and Iram Javed scored a 12-ball 10. Unlike Sri Lanka, Pakistan struck eight fours and a six. The two sides will now go head to head in the ICC Women’s Champions matches, which will be played at the same venue on 1, 3 and 5 June.