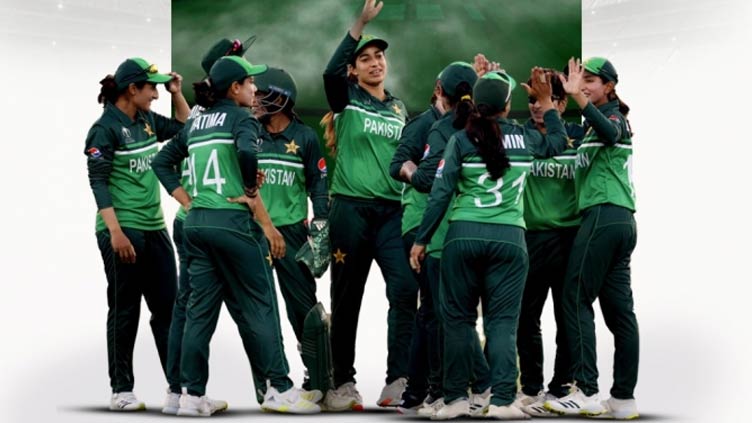 LAHORE (Dunya News) – With the aim of reducing the national side’s gap with the leading international teams and creating more opportunities for players to grow and evolve according to the demands of the contemporary game, the Pakistan Cricket Board today unveiled a bumper season for the women cricketers.

In what will be the first instance of Pakistan staging the ICC Women’s Championship fixtures, Sri Lanka will tour the country for three ODIs in May-June. Their tour is beefed with three T20Is – to be played under floodlights – that will help the two sides in their preparations for the Commonwealth Games, Asian Games and the much-anticipated ICC Women’s T20 World Cup, which will be played in South Africa in February 2023.

Bismah Maroof’s side will host three more ICC Women’s Championship ODIs in October-November when Ireland will arrive in Pakistan for what will be their first tour of the country. Along with three ODIs, the two teams will also face-off in three T20Is.

The Ireland women side’s visit will follow the national side’s participation in a triangular T20I series in Bready that will involve the hosts and T20 World Cup champions Australia in July ahead of the eight-team Commonwealth Games in Birmingham.

Before the Ireland’s visit, Pakistan women will travel to Hangzhou, China, for the 19th Asian Games in September. At the backend of 2022, the national side will participate in the ACC Women’s T20 Asia Cup, the details of which will be announced by the event organiser.

2023 will begin with a challenging tour of Australia in which they will play ICC Women’s Championship ODIs and three T20Is in January-February. The tour will further test the ability of the side and provide them with the crucial experience to continue to grow as a team.

With the ambition of creating a strong talent pool at the domestic level and lay a proper pathway structure, the PCB, in a first, will organise an U19 T20 competition in Muridke in August with all six Cricket Associations fielding their teams.

This initiative will help the PCB to reach out to passionate girls in every nook and corner of the country and help them materialise their dreams of playing the game at the competitive level.

The players who standout in the U19 tournament will have a chance to feature in the senior women’s domestic season 2022-23, in which around 100 cricketers will feature.

The senior domestic season will begin with the T20 championship in September in which seven teams will participate. The event will be divided into two phases with four teams, comprising best players from the six Cricket Associations, featuring in the first phase.

The top performers from phase one will lock horns with the international cricketers in the second phase of the championship, in which three evenly balanced teams will contest.

The season will conclude with a 14-match One-Day tournament in April with Karachi hosting the four-team event, which will be played on double round-robin league basis to provide all the participating players a healthy mix of quality and quantity.

Head of Women’s Cricket Tania Mallick: “The past few weeks have brought to light the gulf between our side and the leading international teams. To develop and strengthen our national side, it is imperative to have a strong and competitive domestic structure and provide more opportunities to the national side to play in challenging conditions so we continue to gauge where we stand.

“We have put in a lot of thinking before penning down our upcoming season. I am grateful to all six Cricket Associations who have jumped on board and expressed their desire and willingness to develop women’s cricket at age group and senior rungs in their jurisdictions. Their help and support will unearth talent from all parts of the country and, with a strong system in place, I am sure we will be able to produce players who are capable of performing according to the contemporary demands and needs.”

Pakistan Women’s Head Coach David Hemp: “It is extremely important for our national side to continue to be challenged and play in tough conditions against tough oppositions to continue to grow and our commitments in the next season will help us on that front.

“Though, the recent results have not gone in our favour, but the individual performances underscore that these girls have the potential, and we need to provide them opportunities to upskill themselves. For the first time in the history of the World Cups, a Pakistan batter scored a century, our spinners have dominated the oppositions and a young all-rounder, just out of her teens, was recognised as the emerging cricketer of 2021 by the game’s global body.

“I am certain that the upcoming season will help our team develop and we will see consistent results.”

Pakistan women’s captain Bismah Maroof: “Over the recent years, the women’s cricket has grown immensely and the level of competition has increased manifold. In such a backdrop, it is very important that we have proper international and domestic schedules.

“Playing more international games will aid the national side in better pressure handling and capturing the key moments, which we have not been able to do recently despite some outstanding chunks of play. We also need to have better bench strength and the introduction of an U19 event will go a long way in helping us with that.

“There is certainly plethora of talent in our country and the feedback that I have received from coaches about players from emerging camps have been great. We need to test that talent in match situations, and giving them matches under pressure environments will help in their growth.

“Taking a look at our calendar for the next 10 to 12 months make me excited and I am looking forward to it.”