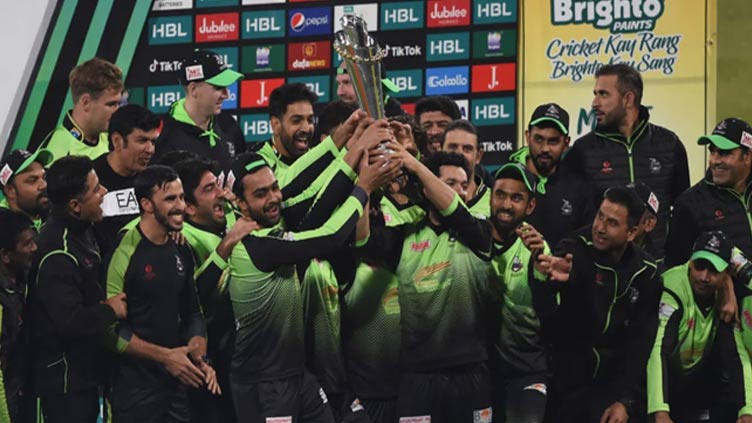 LAHORE (Dunya News) – Lahore Qalandars triumphed over Multan Sultans in the final by 42 runs to win the seventh edition of Pakistan Super League (PSL 7) in a thrilling game at the Gaddafi stadium of Lahore.

Multan Sultans failed to achieve a target of 181 runs and were bowled out at 138 runs letting Qalandars to win PSL title for the first time.

Muhammad Hafeez shinned brilliantly in the finals and was declared as the player of the match for his 69 runs off 46 balls.

Multan Sultans took a decent start but soon lost the pace with the skipper Muhammad Rizwan’s early wicket who could only score 14 runs off 12 balls. Shan Masood was also soon run out by Fakhar Zaman and scored 19 runs off 15 balls.

Qalandars’ skipper Shaheen Shah Afridi stood out with his brilliant bowling crushing the middle order of Multan Sultans. He took the wickets of Tim David, David Willey and Rumman Raees. While Harris Rauf took the key wicket of Khushdil Shah who was also the highest scorer of Sultans making 32 runs of 23 balls. Both Zaman Khan and Muhammad Hafeez took two wickets each.

It is to be noted that Lahore were handed with a defeat in the Qualifiers by Multan but today, Qalandars came stronger and became the champions.

Qalandars got their hopes back again when Muhammad Hafeez came and retaliated against the Sultans’ bowling attack until he was caught by Shan Masood on Shahnawaz Dahani’s bowl.

Hafeez remained the top scorer for Qalandars who added 69 runs
off 46 balls with the help of 9 fours and 1 six.

Crushing the Sultans’ bowlers, Harry Brook played a decent innings for the Qalandars and added 41 runs off 22 bowls.

David Wiese, just like his last innings, hammered some belligerent hits and helped Qalandars sailing towards a competitive total of 181 runs in the limited 20 overs. Wiese scored 28-runs off just 8 balls smashing 3 sixes and 1 four.

In the bowling, Asif Ali took 3 wickets while both Shahnawaz Dhani and David Willey took one wicket each for Sultans.