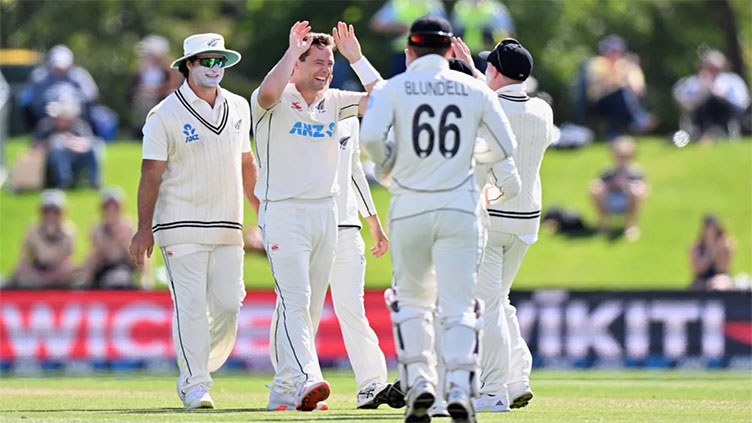 South Africa were 298 for seven at lunch on day two of second Test against New Zealand.

CHRISTCHURCH (AFP) - Matt Henry and Neil Wagner brought New Zealand back into the second Test against South Africa with four wickets to have the tourists 298 for seven at lunch on day two in Christchurch on Saturday.

South Africa, resuming at 238 for three were restricted to 60 runs in the morning session with Marco Jansen on 11 at lunch and Kagiso Rabada on two.

Henry struck first when he removed Temba Bavuma and Kyle Verreynne in the space of 10 deliveries.

He was unlucky not to have a third wicket when he found the edge of Rassie van der Dussen s bat but the chance was put down by Tim Southee at third slip.

It was the second time Dussen had been dropped off Henry s bowling -- when on seven and 21 -- but his luck ran out on 35 when he was caught at first slip to give Wagner his first wicket.

The South African-born Wagner followed up with the wicket of Wiaan Mulder who ballooned a top edge to wicketkeeper Tom Blundell and was gone for 14.

Bavuma added seven to his overnight 22 before he was bowled by a Henry yorker while Verreynne went in Henry s following over when he poked at a ball moving away and gave Tom Latham the catch at second slip.

Henry, who took nine wickets in the first Test, has figures of three for 80 while Wagner has three for 59.